One summer, back in the late nineties we decided to take a quick trip eastward combining some antique picking and vacation activities as a fun time together with our daughter Cassandra before she left high school to go to university.  The objective was to have no specific plan, and wander eastward as we saw fit buying along the way, with the ultimate goal of reaching Nova Scotia.  Even if we didn’t have the time on this trip to explore further once we got there. We put about $4,000 in an envelope for purchases, packed out bags and food hamper into a full size cargo van we borrowed from our son Brodie, leaving him our pick-up to use while we were gone.  We were not looking for furniture on this trip, and felt it safer to leave our small sized purchases locked up inside a van at night.  We got a good, early start and made it to our regular stomping grounds around Victoriaville in time to do a quick circuit of the picker’s barns there before settling in for the night at our regular spot, the Motel Marie -Dan in St. Eulalie.  We didn’t buy much, wanting to save our money for buying in the previously untraveled regions to the east.

Day two, after a hearty breakfast we shot down #20 expressway past Quebec city until the village of St. Jean Port Jolie.  This pleasant little village on the banks of the St. Lawrence river is the home of the Bourgault brothers, who founded the “École de sculpture de Saint-Jean-Port-Joli” in 1940 with the support of the Quebec government.  The carvings became very popular with tourists and locals alike, and still today the village is chock a block with wood carvers.  To be honest although we greatly respect this form of carving, we were hoping to find  a unique folk artist more towards the lunatic fringe of the spectrum who might be hanging out there.   We had a great time looking at the museum and several shops but didn’t find what we were looking for.

After a nice lunch we made our way along the coast on the two lane Hwy # 132 past Riviere-du-Loup  as far as Trois Pistoles, a trip which would ordinarily take about an hour, but in our case took over four due to several stops at yard sales, markets, and shops. We hadn’t expected it, but we found a lot of wonderful stuff and by the time we stopped for a coffee in Trois Pistoles the cargo area of the van was almost full, and our envelope was over half empty.  We had a little conference, and thinking of Nova Scotia decided that instead of going further into the Gaspe we would turn back to Riviere-du-Loup, hang a left on Hwy #85 which becomes Hwy#2 as soon as you cross over into New Brunswick  and on a good day with steady driving will get you to Amherst, Nova Scotia in about eight and a half hours.  Our goal was to sleep in New Brunswick.

It was dark and raining by the time we had made our way past the endless forests of this part of Quebec and then we hit the construction.  On a 1 to 10 scale of “hairy” driving this was a solid eight. Pounding rain, mud, and lots of starting and stopping. We white knuckled it for about another hour and finally made it to Grand Falls, New Brunswick.  It was pushing ten o’clock, and we really needed to stop.  Turns out there was a convention in town and we were turned away at every motel, and feeling quite desperate before we got the advice that the only room we could get would be at a bed and breakfast in a recently converted old nunnery a few miles out of town.  We’re not big B and B fans but great.  We’ll take any port in this storm, and after a call ahead to confirm they had a room, we went off with the little hand drawn map we were provided.

The storm grew stronger, and the thunder and lightning more brutal, as we wound our way up into the surrounding hills, until there in a flash of lightning worthy of Alfred Hitchcock, the huge, old, Victorian Gothic Institution appeared, with a giant cross above the entrance;  and we drove up the hill and pulled into a parking space, wondering what we had gotten ourselves in to. 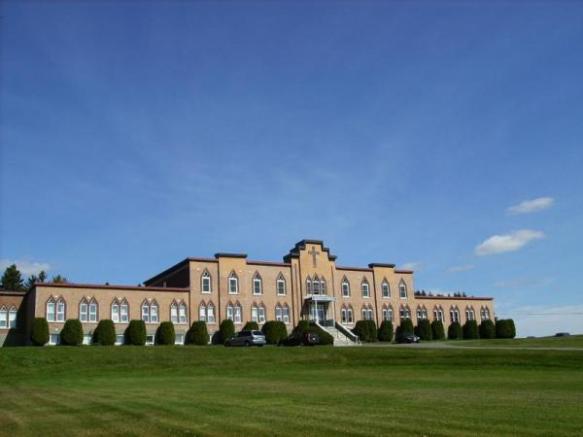 I can’t recall, but I’m sure we were greeted by a perfectly nice night attendant, although in my imagination he was someone akin to Igor.  We were lead down a long, dark, corridor to a pair of rooms which seemed to remain untouched from their former life.  I remember the institutional green walls and old steel beds.  They were small, and basic, but a blessing in our situation.  In bed, with the lights out, and the still frequent flashes of lightning and thunder I began to hear people moaning in the distance. It kinda freaked me out, but I had no desire to investigate.  I put the pillow over my ears and did my best to fall asleep.  It was a long night.

Next morning, we met Cassandra in the canteen, and after coffee and hot chocolate decided to get the heck out of there.  “Did you hear all that moaning” Cassandra said.  “It really freaked me out”.  “  “Me two.”  “Me three” said Jeanine.  We saw the caretaker on the way out, and he explained that it had become a B and B, slash old people’s home, and that some of the old dears were restless.  The place didn’t look all that spooky in the daylight.

In town, we sat in a little mom and pop restaurant, finishing breakfast and discussing our plan.  We had learned that the construction which we had only experienced about an hour of, continued for several more hours ahead as they were making the highway into a divided four lane.  Desperately need by this point especially with all the summer tourists.  We sat there for a while discussing our progress, and what lay ahead.  We were grateful for the use of Brodie’s van, but it was noisy and fairly uncomfortable.  We realized we had a full day of crappy driving ahead just to reach Nova Scotia, and then we would only have a couple of days to look around before heading back.  Then our conversation turned to how much we loved Quebec City, and we could be there by late afternoon if we turned back.  It was an easy decision for us.  We called our favorite, cheap hotel in old Quebec, Le Manoir des Remparts and made a reservation for three nights.   We had a wonderful time, and felt happy and relaxed on the twelve hour drive home.  Resolving to make it to Nova Scotia another time.  Perhaps, looking into air fares.