Occasionally I will have a Maud Lewis painting displayed for sale in my shop, and it is sometimes interesting to get people’s reactions to a $6,000 painting that at first glance looks like their 12 year old niece painted it.  A “my goodness will you look at that”, and some covered up snickering pretty well expresses their complete disbelief that something so simple could possibly be worth so much money.  I occasionally will give a brief description of the circumstances of her simple Nova Scotia life, and add fuel to the fire by informing them that in her lifetime she sold them for twelve to fifteen dollars from her tiny little house by the side of the road.  I then suggest that it is probably simplest to think in terms of supply and demand.  The supply of these paintings has stopped since her death in 1970, and there are many more people wanting them than there are paintings available.  This of course skirts the main issue of their confusion as to how anything like this could be desirable in the first place. To answer this you have to go a lot farther.

Beauty is in the eye of the beholder, and for some people, and I include myself in this group, great value is placed in anything that is produced by man or woman that manages to capture, or in some way manifest beauty.  I do not mean “pretty picture” beauty here.  I mean beauty as in creations that manage to be a celebration of existence, or a connection to the greater truth.  Something that has energy.   This energy can be found occasionally in the works of trained and untrained artists alike.  The real value in truly great works of art is in experiencing them, and in doing so to be educated and transformed by them.  Understanding beauty is our salvation.  Money really just confuses the issue.   So in relative terms, $4 million for a Tom Thompson and $6,000 for a Maude Lewis:  the Lewis is still cheap.

What is folk art.  Any precise definition of art is by nature a slippery process and open to question.  “Folk art” is a term applied to such diverse things as a finely crafted, highly organized Mennonite fracture drawing which expresses the collective manifestation of an ethically based decorative tradition, and yet is also applied to the highly individualistic outpouring of any untrained painter, sculptor or other practitioner.

Folk art is usually one step beyond the mundane.  Not just a container to bring water to the mouth for survival (cupped hands for example), but instead a cup lovingly fashioned to bring pleasure or attract notice even when it is not being used, such as an intricately carved canoe cup.

On another level we can simply say that folk art is the art of the ordinary people.  It is sometimes called primitive art or the people’s art because by definition the artist has not been academically trained.

Folk art is made for one or more of three reasons: to share beliefs and traditions, to make some useful object beautiful, or to express one’s feelings.

Folk art, by definition has been produced and appreciated since cavemen and women started smearing blood and feces on cave walls, but the academic study and appreciation of folk art is a relatively new thing.  An English writer named William John Thomas first coined the phrase “folk lore” in 1848.  At the time most anthropologists considered folklore as worthless peasant creations.  They were more interested in studying artifacts such as weapons, tools and such.   It was through popularized folk tales such as the Brothers Grimm books that peasant traditions and art forms began to become interesting to the intellectual  class.

I would argue that folk art did not show up on the radar of fine art institutions until around the turn of the century in Paris, when Pablo and the boys flipped out over the African art they saw for the first time, and started producing what today is called modern art.  This led to a wider acceptance of all forms of art.  Folk art has become increasingly more popular and studied in Canada, really since Expo 67 gave us a greater appreciation of who we are.

Several eyebrows were raised when the hammer came down at $17,500 plus10% buyer’s premium, plus tax on a carved cane at the October 1st Jim Anderson auction in Jarvis this past October 1st.  Lot 101 was described in the catalogue as an “exuberant and imaginative work attributed to James Beaver. This technically proficient piece features a carved beaver as the hand piece of the cane, well carved in an early style”.  Dealer chat beforehand suggested that it should come down around the $4-6,000 mark if it was anonymous.  Anyone’s guess with the attribution to Beaver.  We were all surprised by the outcome. It was however no surprise that it went to a dedicated collector of his work who is known to have collected

over thirteen paintings by the artist.

Known as “The Six Nations Artist”, Chief Beaver travelled the Grand River from Caledonia to Brantford in the 1890’s, painting houses and business buildings for a living. During his life span from 1846 to 1925 he lived at Beaver’s Corners near Ohsweken on the Six Nations Reserve. A gifted man of many talents, he was known as a carpenter, a wood-carver, a juggler and a showman, as well as a painter.

On stage, he was “Uncle Beaver” as he travelled across Canada and the United States with road shows, carnivals and medicine men. Today some homes on the Reserve still retain samples of his woodworking and fine carpentry skills.

Jim Beaver and his wife, Lydia (Bay) from a Mohawk Reserve in Quebec, raised three sons and four daughters. Granddaughter AIta Doxtador remembered being impressed by a concert her grandfather put on in Christ Church at Beaver’s Corners and the canvas backdrops he painted for the occasion. She also remembered seeing him seated in front of his easel. Because he couldn’t read or write, he once asked her to write TITANIC on a paper for his painting of a ship.

I currently have a Beaver painting of flamingoes which is one of his more generic Victorian scenes that he would have sold from door to door.  You can view it on my shadflyantiques.com website; and there are examples of his furniture, at the Chiefswood Museum near Oshweken, and other examples of his painting and carvings at the excellent Woodland Cultural Center in Brantford. 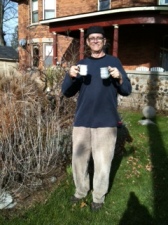 So oddly, I start this blog space with a rather faded reference to “treky” days  when in fact this is going to be a blog about the life, and times, and observations of Shadflyguy –  humble servant, and seeker of the authentic and beautiful in things produced by past and in some cases of present people.

Come and enjoy with me a nice cup of tea or coffee, or espresso as the case may be, and I will attempt to explain why for the past thirty years I have occupied my waking moments finding, selling, and researching Canadian antiques and folk art, when in my “previous” life I was trained and fully employed making high tech slide extravaganzas, as were “all the rage” then at places like Expo 67, and Ontario Place.

I am going to attempt over time to transfer to this site the four giant drawers I have full of photographs, notes, and background information on some of the Canadian folk artists I have met.  This  in some kind of orderly fashion so as they may be useful to those seeking this previously unpublished material.  I am also going to attempt  to relay some of the juicier “picker’s stories” I have heard in my travels because they are fun.  I may even illuminate some old time dealers tricks, and things to watch out for when buying antiques.  If I really get rolling I may even start to document my furniture restoring techniques. Although I am concerned about the possibility of someone ruining dear Grandma’s rocker and holding me personally responsible…. hmmm.  You can see I am thinking about categories, and ramifications.  I think I may have the hang of this but do I have the chops.  We’ll see.

Right up front I want to thank my daughter Cassandra for leading the horse to water.   O.K. Welcome aboard, and let’s get at ‘er and post this puppy before I loose my nerve.