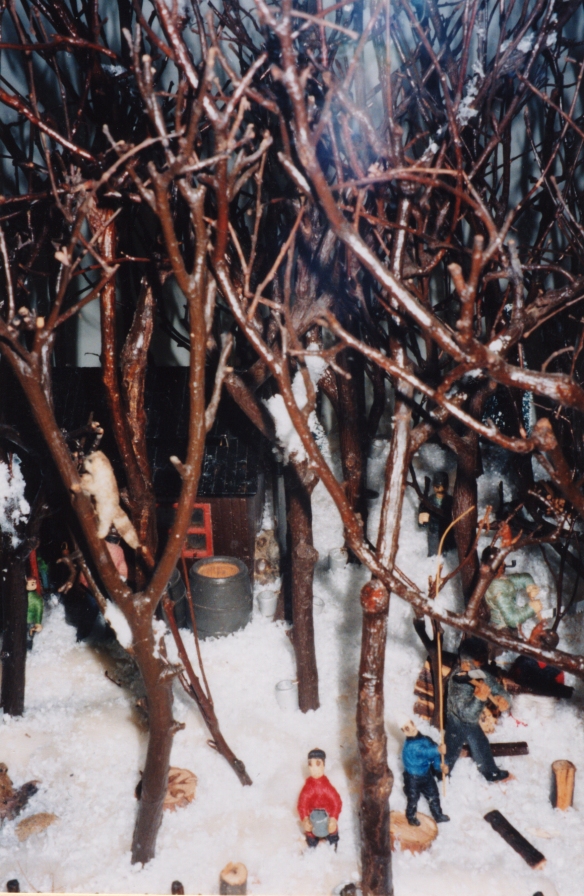 In the mid 1990’s we did what turned out to be a one time show in the Laurentians ski area north of Montreal.  During ski season in the club house of a popular ski hill.  The assumption was that the multitude of skiers would come off the slopes and couldn’t help themselves from wandering through the show and selecting a few prime antiques for their ski chalets.  Turns out this assumption was wrong, and we spent three days watching people ski, and then going directly to their cars and leaving.  We rented a chalet with friends and so when we were not busy doing nothing at the show we at least had some good food and laughs in commiseration.   It turned out to be a pretty expensive venture which didn’t really pay off, if it was not for the fact that in being there we came across one of the best and most important pieces of Quebec folk art we had ever encountered.

Upon loading in we were struck by an incredibly detailed diorama, about three feet wide by two feet deep and high, on the table of Quebec dealer/collector Serge Brouillard, whom we knew quite well from previous dealings.  What a wonderful thing to behold.  Looking into this tiny word of snow and maple forest with little finely carved people, instruments, buildings, horses,  and even tiny squirrels in the trees, you just loose yourself in the details.  A masterpiece which would have taken an amazing amount of time and patience to realize.  Completely over the top.  We had to have it.  It wasn’t cheap as Serge knows his stuff, but it was spectacular, and in the end, how often are you offered a chance to buy spectacular.   We made a deal and sold it directly to our best customer and most serious collector of folk art.  She loves it and continues to be it’s guardian. We visit it once and a while just to go back to that magic place.  Fortunately it came with full provenance which is kept with the piece.  It’s a fascinating story.  I recount it here in English. 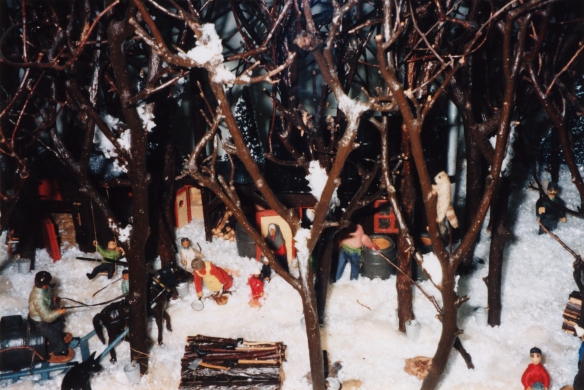 This scene of Maple Sugar Time was realized by Adelard Bronsseau, from St Jacques de Montcalm, Quebec in 1930.  He was an exceptionally creative man, very active in many trades (contractor, jeweller, stone carver), when he was suddenly struck by an unknown sickness. The main effect of this sickness, apart from its painful condition, was to keep him from sleeping at night. In order to occupy himself while his family was sleeping, he started carving one by one the figures, the tools, the animals. Which were going to make up this wonderful rendition of a traditional rural scene.

The village priest, M. Piette, seeing how his parishioner’s health was declining, took the bull by the horns and declared a “novena” (period of communal praying, usually nine days) for the return of the man’s health.  Probably inspired by the words of Voltaire “Work protects man from boredom, sickness, and need”, the priest offered Adelard the following deal, “My dear Adelard, if you regain your health, you will have to give your Maple Sugar Scene to the parish”. Adelard Brousseau agreed, but it was only after many months of prayers and care that he got better.

As agreed the scene was completed and turned over to the parish, and it’s new priest Angelus Houle, who was a good friend of the artist, decided to exploit the commercial potential of such a gift, by displaying it for a fee at various fairs, and public exhibitions of the district.

Adelard Brousseau’s daughter, Madam Dion, remembers that when she was a little girl her father’s Maple Sugar Scene was a great attraction at the fairs, and people would line up to view it, in spite of the high entrance fee for the time: (10 cents for children, 25 cents for adults).

Madam Dion relates that sadly she did not have the means as a child to view “the masterpiece that her papa had created at night, in his dark little workshop”.  She had seen the miniature figures dressed in woolen cloths, the horses, the carts, the buildings, but never the whole scene in its actual presentation.

Many years later in June 1992, the Maple Sugar Scene is only a vague childhood memory for Madam Dion, when suddenly it is brought back into her life by a telephone call from a nun named Sister Therese who explains that she had bought the scene from Angelus Houle, a long time ago, on the understanding that she would eventually return it to the artist’s family.  The time had come to fulfill this promise, and she was ready to deliver the piece to Madam Dion. And so it is that Madam Dion recovers a wonderful part of her personal heritage, which she can now admire at her leisure.

Madam Dion kept her father’s masterpiece for three years.  When she decided to sell her house and move into an apartment, she also had to sell the Maple Sugar Scene, which was too large for her new space.

Born at Greenock in Scotland in 1791, the young Alex was introduced at an early age to life on the high sea. When only eight years old he accompanied his father, a sea captain, on an ocean voyage to Newfoundland. In subsequent years he worked his way up from cabin boy to log keeper and eventually captain by the time he was thirty. As a sea captain he travelled around the world. His exploits are the stuff of seafaring legend: he was shipwrecked on Long Island in 1807, saw the Duke of Wellington in Lisbon, and even caught a glimpse of Napoleon Bonaparte, the deposed emperor of France, in exile on the island of St. Helena in 1817. The captain covered huge swaths of the globe, sailing to ports as far afield as China and running a naval blockade off Buenos Aires. And, for good measure, he endured robbery and plunder at the hands of pirates on the storied Spanish Main.

At the prodding of his brother Collin, McNeilledge came to Port Dover with his wife Mary Ann in 1832 to work as a bookkeeper at his mill, and he purchased a farm a few years later. But the mundane life of clerking and farming was nothing compared to his high seas adventures. You can you imagine how exciting farming was to him after that life? So he basically left the farming to his wife and headed down to the docks to captain the boats. McNeilledge became a fixture at the docks and was involved in many operations around port.

In the 1840s he began to produce a series of charts and maps for navigating Lake Erie. The document was widely used until the early 2oth century. In Lake Erie – a pictorial history by Julie MacFie Sobol and Ken Sobel, they quote the captain from the preface of his 1848 “Chart and Sailing Instructions for the North Shore of Lake Erie” , ”All the Lake Ontario Captains on both sides and the Lake Erie captains on the American side are afraid of the North Shore.”  His journal filled a need, for without the captain’s well observed navigational instructions and maps, many more vessels would have joined the underwater fleet”. 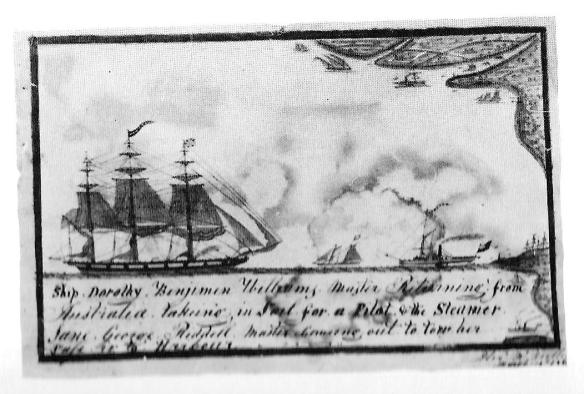 In his later years he began to make drawings of ships which he presented as tokens of friendship to captains of visiting vessels , as well as relatives and neighbours.  The drawings were often personalized by naming the ship after the wife, the master after the husband, and smaller vessels after the children. Most were accompanied by captions depicting fanciful and fictitious voyages, and many were inscribed with humorous autobiographical comments such as : Captain Alex. McNeilledge -76 years- Use no specks – Chew no tobacco – Take only a wee drop as required” 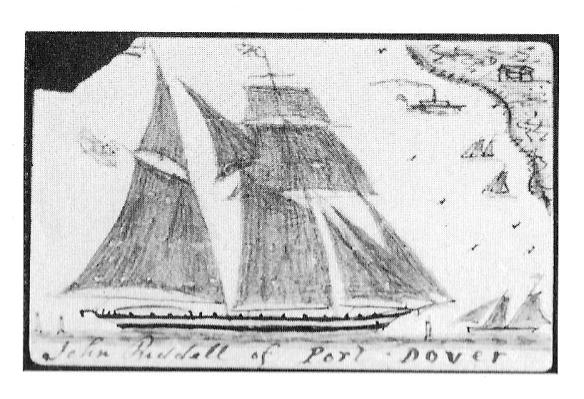 He maintained a diary over the last 37 years of his life, recording not only routine daily events but also many personal feelings of frustration, loneliness and non-acceptance. The captain was found by his wife on August 21, 1874, having taken his life in the ravine behind the house the previous day. 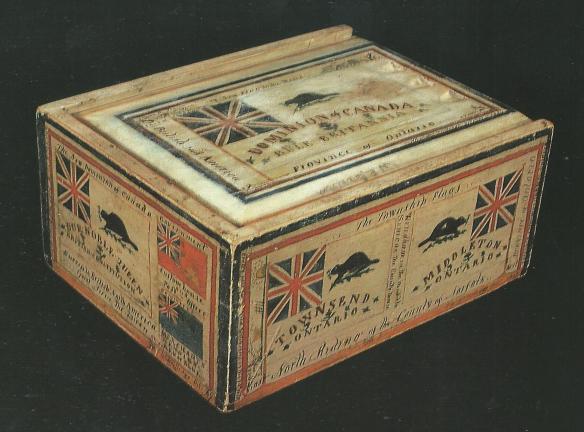 But rather than his sad ending, I prefer to think of all the joy he has given people over the years with his charming drawings, water-colours, and of course the exquisite 1867 Confederation box. It is fitting that in that year, McNeilledge fired off his cannon to mark the start of the Canada Day Parade in Port Dover. The first in Canada, and a tradition that continues to this day.