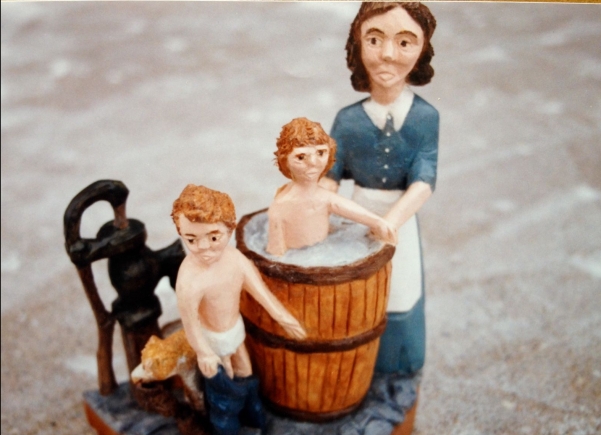 By the mid-nineties we were doing a lot of business with Quebec collector, Pierre Laplante. He was, at the time a very successful dentist, and determined collector of Quebec antiquity and contemporary folk art.  A very good fellow who we enjoyed meeting up with every few weeks at his country home, where typically after a good meal and a little wine was consumed we would inevitably end up in his converted machine shed, which was stuffed to the walls with wonderful things, so that I might buy some of what he was prepared to let go of.  At the time he was keeping five or six pickers busy full time in an attempt to find him the “all” of the best pieces available.  They would bring in full truck loads and he would usually buy everything to get the best price, and assure their dedication.  He would sell me all the stuff he didn’t want to keep at very reasonable prices, and that kept me coming back. His appetite was voracious and he rarely said no so there was a lot of stuff arriving.  For a couple of years before we both slowed down we did a lot of great business together. 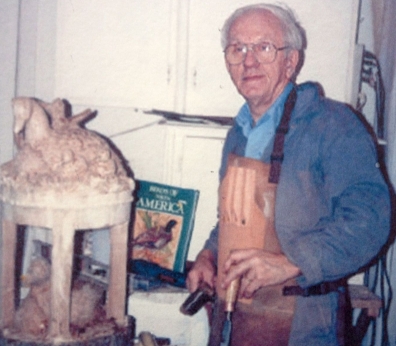 Rene Dandurand in his workshop

One particular evening he suggested that after dinner, he was particularly excited to show me some new work by a previously unknown carver that he had recently become aware of.  That was the first time I saw the work of Rene Dandurand.  It was different than most other work being produced in Quebec at the time, and although I had to admit to Pierre that it wasn’t purely my style (my taste runs a bit more primitive and less Norman Rockwell) I could see that he had real talent and vision, and I liked that his pieces contained humour and emotion.  Pierre was good enough to give us his address and phone number in nearby Valleyfield.  We called him and he was very welcoming.  We made an appointment to see him the following day.  He was very open and we had a good talk with him and his wife Julienne before they showed us his workshop where we bought five or six pieces. I made several stops at his place on subsequent trips but as he became popular there was less and less to buy.

Rene Dandurand is a highly original Quebecois carver. Born in 1934, he started carving in the late nineties, after early retirement from his employment as a machinist. His first piece was a simple small boot, but this was quickly followed by roosters, birds, and figures. Before long his subjects evolved into more elaborate and complex compositions incorporating figures, foliage and animals to tell a complete story.  As Quebec folklorist Lyle Elder points out in his bio of the artist, “Rene Dandurand carves every aspect of the human condition and always with great humour. There is a joyfulness in his vision of people busy at their lives. His carvings are always evocative, charming and full of colour.  Rene Dandurand is certainly one of Quebec’s most talented artists”. 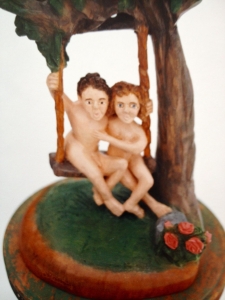 Rene Dandurand’s carvings are worked in one piece from a solid butternut or pine block. Some early works are left bare, showing the grain, but most are painted by his wife Julienne, an excellent colourist, after lengthy consideration of suitable colours. Although Dandurand’s children supplied him with a full set of carving chisels, he prefers the familiarity of his two or three ordinary old knives. 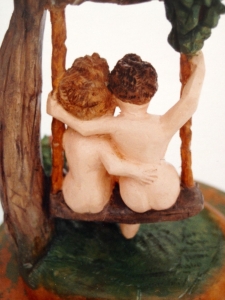 Dandurand’s carvings are represented in major public and private collections of Canadian folk art. I am uncertain if Rene continues to live in Valleyfield, Quebec.  It was suggested to me a couple of years ago that he had passed away,  but as yet I have been unable to confirm or deny  it.  If anyone knows, please let me know and I will amend this article.  Thanks. 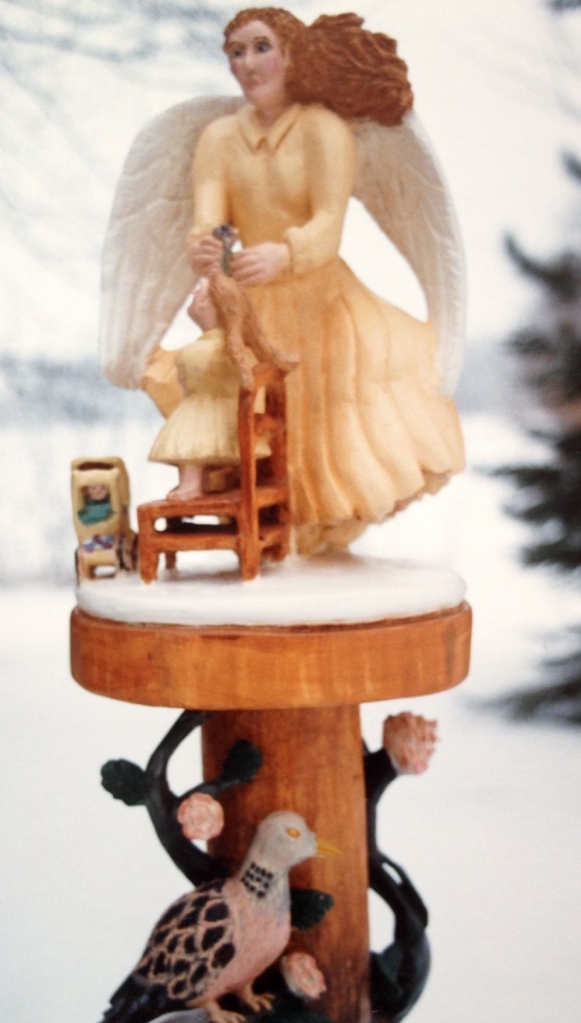