This handsome fellow lives in our living room.  He is a favorite of ours, and we have come to find out that he was made by Rosario Gautier, late of St. Charles de Bourget, Lac St. Jean Quebec,.  We didn’t know who made it when we bought him about 25 years ago,  and it didn’t matter so much because we loved the piece, but it was satisfying to eventually put a name on it.

Over the years we have found and bought several pieces by the same hand.  The chunky, colorful style is unique and easily recognizable, but all we encountered were unsigned, save for a few initialed “RG”.  Not a lot to go on.  Then one day, some picker, I can’t recall who, said ”Oh, yes that’s Rosario Gautier from Lac St. Jean.  He’s been carving for years.   Now at least we had a name and place to ask about.

The next big break  came in Quebec city when walking back late one night to our hotel after a particularly memorable meal and lots of good wine with friends who are lucky enough to live there.  We passed in front of a closed antique shop and there in the street light was a photo in the window of Mr. Gautier, along with several of his pieces, and a short hand written bio.  We were able to find a pen and paper and copy out the bio, and take this slightly blurry picture through the glass.  We were up and out in the morning and never got back there. 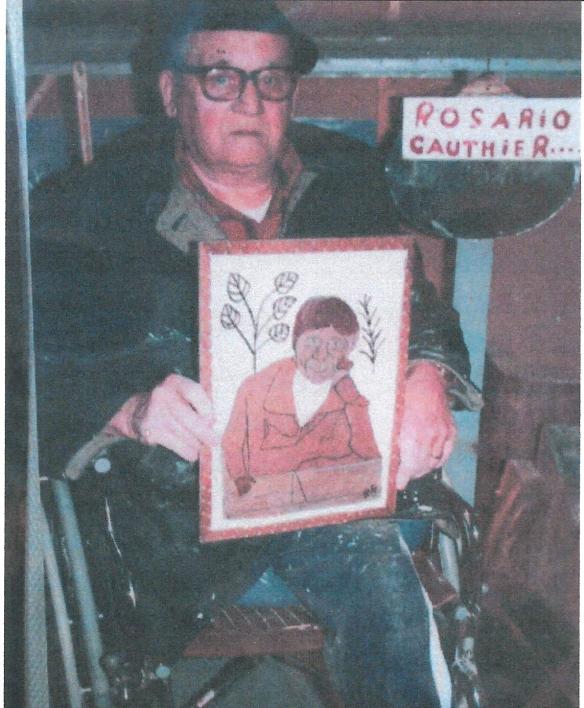 Here’s what we were able to record about him that night. “Rosario Gautier was born and lived all his life at St. Charles de Bourget, Lac St. Jean, Quebec.  Father of a large family (12 children of whom 9 are still living), he was a farmer and a blacksmith in logging camps. He started carving after retiring in 1971, and produced a large body of work. Most of his pieces are in the medium size range, but he also produced life sized animals, as well as an eight foot crucifix. The muse de la Civilization du Quebec owns 350 of his pieces, and he is represented in many major collections in Canada and the Unites States.”

By this time we had bought many pieces of his work.  We kept some, and sold most to Quebec collectors.  All the while we love his funky, choppy versions of birds and animals.  All of them rough, and not self-conscious, but also showing a fineness and understanding of form.

We were in the habit those days to try to meet as many folk artists as we could in our travels, but as much as we admired Mr. Gautier’s work and would love to have met him, we were unwilling to make the 3 hour drive north of Quebec city, on spec.  Not even knowing at this point if he was still alive.  I google mapped St. Charles de Bourget just now, and it appears to be a charming little village of 690 souls set on a beautiful northern lake, but it is well on the way to nowhere.  With very few villages en route,  it would mean three hours of looking at trees, and then if we didn’t connect, three more hours of trees coming back.  We didn’t feel like risking it. 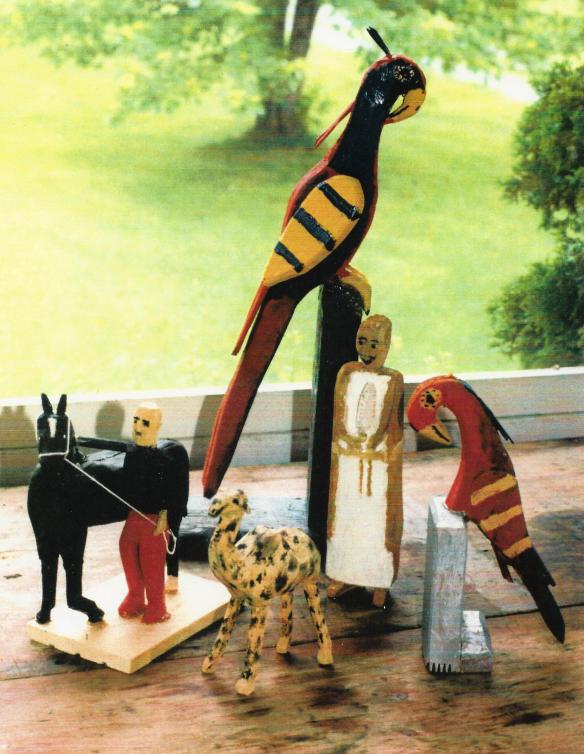 We continued to see and buy his work from time to time, then in the mid-nineties we bought the Mongeau collection, and it included about forty small pieces that Mrs. Mongeau described to us as Mr. Gautier’s last works,  which he made just before passing away at the age of 80 in 1994.  I’ve included pictures of some of this work here.  I love the directness of this work, and even though you can see it is not as accomplished as some of his earlier pieces like our 3 ½’ long bull,  it contains a mighty spirit.

I’d still like to make it up that way just to see if I could find that eight foot crucifix.  Even if it turned out to be fruitless, it’s close to Saguenay which from the pictures seems like a pretty interesting place to check out.  I love Quebec.  Quebec J’taime.  Maybe this fall.