It’s  5:15 pm and it is dark outside my window. Above is a picture of how it looked at 3:00 pm.  Living on the north shore of lake Erie, we live in what Ontarians call the banana  belt,  and we are spared from much snow fall.  The prevailing winds blow from the north and typically dump snow on the American side, which we love to watch on t.v.   But we’re not laughing today.  It is rare when the snow comes in from the south west but when it does we get buried.  Today is such a day.  It started at about nine this morning and it hasn’t stopped since.  We took an early run for the supplies we would need and hunkered down.  I do look forward to a nice snow storm from time to time as long as we are home and the hydro is on.

About 11:00 am I set about working on my blog.  I had decided my subject would be folk art at Christmas time, and folk art created for Christmas.  I wanted to write about the effect that Christmas ideology has on folk artists, and inversely how folk art has effected Christmas ideology.   Folky, Grandma Moses like images of wintery villages, people skating,  and horse drawn sleighs still adorn many Christmas cards and Holiday biscuit tins.  But then again who sends Christmas cards anymore.  I think the polar bears drinking Coke actually figure larger in folk ideology, but in any case.  Within this context I wanted to show how some of my favourite Canadian folk artists interpreted Santa Claus, etc.   That’s where the trouble began. 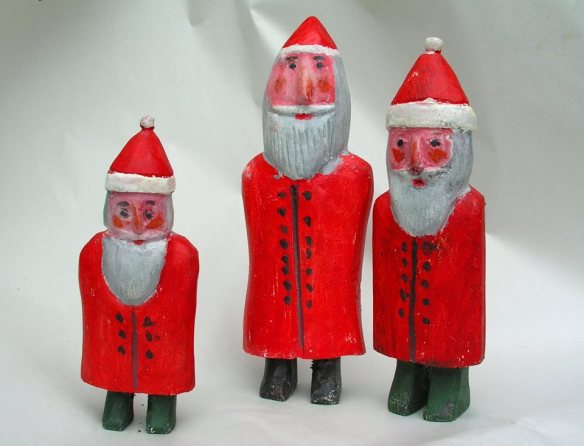 I have documented several pieces of  Christmas folk art which we have owned and sold over the years,  and so I had to do was to go through my photos,  find some examples, and scan them.  Easy squeezy.  You would think, but no, not really because although I have managed to keep our photos reasonably organized: and when I say reasonably I mean that some are in books by subject and labeled, while others are in more randomly arranges in books.  But actually most  remain in photo envelopes awaiting  further sorting, and the labels are very general.  Us in France, Exterior church shots, Us with Friends, Christmas 1997, etc.  So at least I was able to skip several envelopes when looking for Christmas Santa Claus carvings. 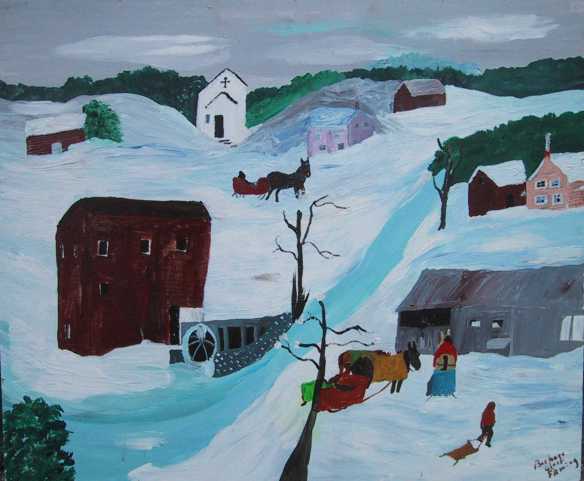 But here’s where the soft, hypnotic snow fall outside the window comes in.  The feeling of being shut in for the duration. The sudden urge to do a 1000 piece puzzle, or as the case was today, to fall into hours of looking at old images of Christmas past, and places visited, and happy occasions remembered, and loved ones who have passed on.  I call it falling down the rabbit home.  It happens to me from time to time when I look at photos, or more often when I research something on the internet.  For instance, the other day I was reminded of the Talking Heads song “Same as it ever was”, and so downloaded the original video on You Tube.  I had never seen it and it excited me, so I watched the next video which was an interesting interview with David Byrne, and then came an amazing one hour video of the band performing live in Rome in 1980.  When I resurfaced three videos later, I came away with a deeper understanding of the talent and contribution of these fine musical artists, but the morning was shot.

night hockey game in Ottawa, circa 1945,
by Elmo Phillips

So that’s what happened. I found several of the photos I wanted to use right away, but a photo of a big Santa and Rudolph made by Ewald Rentz which we used to display by the back door of the church eluded me.  Strange, I thought it would be the easiest to find, but no.  At first I flipped quickly and efficiently through many books before the power of some of the images caused me to slow down and think.  Think about what I can remember of the moment. To observe how different we all looked.  To think about our relationships then. Before you know it, you are adrift. Down the rabbit hole.

Nostalgia is a bitter sweet mix which I rarely indulge in, but today I really let myself go.  I took a deep drink, and now I’m so filled with personal memories that for now I’ve lost the urge to talk about folk art. Another time.  I just want to go down to see what Jeanine is up to.  Knitting probably.  And finally, I want to wish everyone a very happy holidays and solstice; however you chose to celebrate, or not celebrate as the case may be.  Enjoy, and create some new memories to look back on some day. The snow continues to fall.  Tomorrow I’ll get out the shovel. 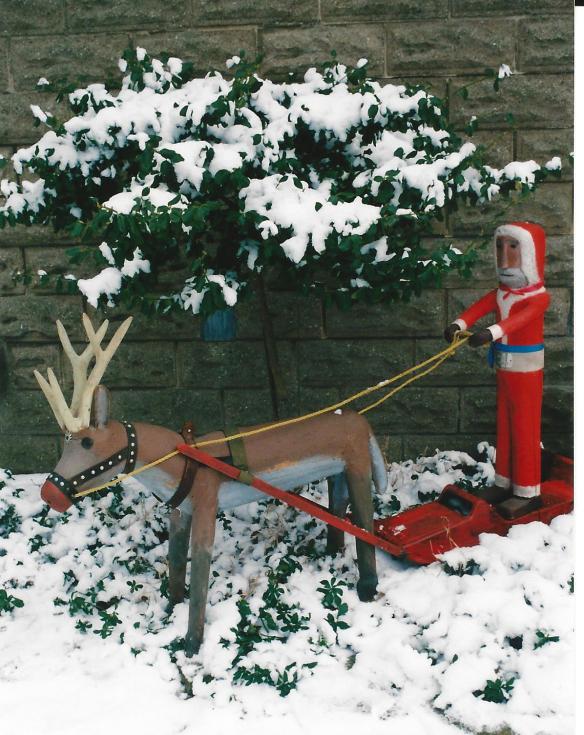 Santa and Rudolph
by Ewald Rentz