I can’t remember how we met Bob MacDonald.  It’s most likely that he found us.  Bob was a full time antique picker who would pull in unexpectedly from time to time in whatever old wreck of a car he happened to be driving.  I don’t think he ever paid over $100 for a car, and he spent all his time in them, so they didn’t last long.  Bob was the type of character that kept me interested in this antique business, come lifestyle.

Bob was charming, intelligent, well read, and knowledgeable in the arts, and literature; but he also liked the bottle, and survived on almost nothing, occasionally being reduced to living in his car.  When he came by, we would make sure he got some food in him, along with his beloved black coffee.

Bob spent all of his time following up leads, and beating the bushes for valuable artwork and rare books.  He was good at it and would occasionally score big time. Then eventually the money would be gone and he may have to suffer through a fallow period.  Those where the ropes. When he found something in folk art, like a Maud Lewis painting or the like he would come to see us.  Sometimes to convince us to put some money up front, so he could actually purchase the object he had found.  We trusted Bob, and he always delivered. 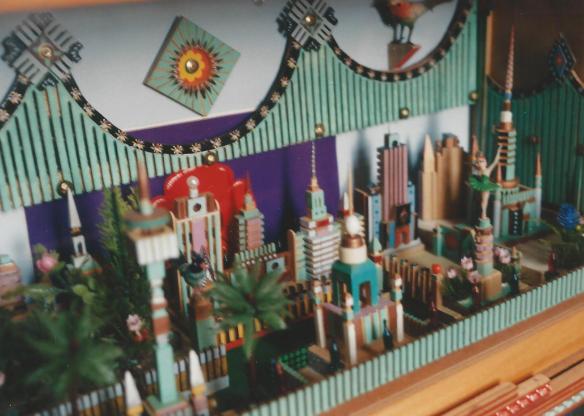 I was working in the garden on a fine summer day in the late eighties when Bob came roaring up the driveway, a big smile on his face, and a car full of what appeared to be aquariums. On closer inspection I could see that they were hand-made display boxes with plexiglass on the top and front.   There was a half dozen on the back seat and two beside him on the passenger seat. He popped the trunk and there were another four large ones in there.  “You’ll never guess what I’m bring you today”.  He could hardly contain himself.  “ I was up in Goderich and stopped in to the Chinese restaurant there for some lunch.  I got talking to the owners and came around to telling them I was looking for art and books, and the young woman there said “Well, I don’t know if you will consider them art, but my father when he wasn’t busy cooking would get out a key-hole saw, and spend hours making these fantasy city landscapes.  Would you like to see them?”  Of course he was delighted to look.  There in the back storage room were dozens of these boxes of various size and configuration. Every one similar with many layers of carefully cut out and painted balsa wood walls, towers, balconies; and courtyards adorned with little plastic trees and flowers. Most of them had a boarder of mini Christmas lights around the front, and occasionally there would be a plastic figure of a ballerina, or chicken, or duck perched atop a column making it appear to be  a giant statue in the courtyard.  The overall effect was mesmerizing.  I know Bob would play it cool, but I bet his eyes were popping out.  She explained that for a time her father would display them in the front window and occasionally someone would buy one, but eventually he became discouraged.  The family had all kept their favorites, and so when Bob expressed interest, they sold the rest of them to him for a song.  Really just wanting to find them a good home and free up the storage space I suppose.  Bob drove directly to us. 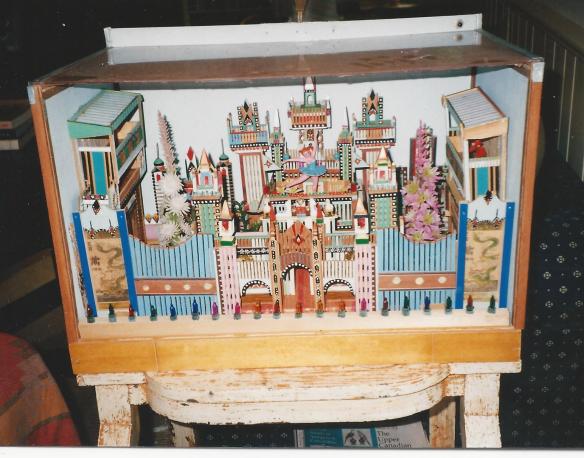 What can I tell you.  Jeanine and I both really liked them and felt they were strong examples of original folk art from a vivid imagination. Perhaps one looking nostalgically back on a childhood spent in China, although a China of the “crouching tiger, hidden dragon” variety.  We felt and would continue to argue that they contained magic .   We weren’t sure if anyone would feel the same and we now had a dozen of them.  It’s the question you ask yourself when you invest your hard earned money in something that most people would find clearly crazy.  If you see it, and can recognize it, I think you are under some obligation to act.  Otherwise, why are you a folk art dealer, and not working at the bank. Or something else that rewards you with a pension, benefits and a regular “Johnny Paycheck”. 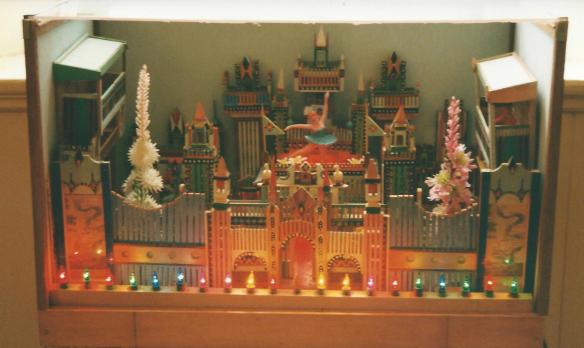 We took them to a few Ontario shows where they were pretty much ignored, or met with a polite curiosity, or in some cases they produced downright hostility.   What is it about some folk art which actually makes people angry? I think it’s a combination of seeing something you revile with a big price tag.  It makes one question the value of money, which can lead to questioning one’s values in general, which can lead to all sorts of problems.  In any case, it soon looked like we would be owning them for a long while to come.  We didn’t have a lot of money wrapped up in them as Bob had passed them on to us very reasonably so we were happy enough to set them all up in  the showroom and plug them all in.  Then turn out the lights and enjoy  the feeling of being transported.  An exciting Friday evening out on the ranch.

Fortunately, the next January we found ourselves doing a show in New York city, and within ten moments of opening a man came rushing up to us needing to know everything about them.  He listened to the story and we soon settled on a price for all of them with the understanding that if any more were to become available he had first dibs.  Also, we were to find out anything more that we could about the artist.  Bob died not too long after, and we didn’t get a chance to ask him to go back.  Our lifestyle was such that I couldn’t take the time to drive to Goderich to see what I could find out, but it’s something I still think about from time to time. The trails pretty cold at this point.