In the 1980’s it became trendy to put your t.v. and/or stereo system in a cupboard to tuck them away when you weren’t using them.  Therefore the demand for antique storage cupboards continued to grow throughout the 1980’s, to the point where the supply could not meet the demand.   I would have a half dozen people looking for such an item and I was only able to bring back one or two from the picker’s I frequented in Quebec.  That’s when I started to look more closely at the out building, or out, out building that were the dealers “bone yards”.  Here, for a fraction of the cost of good cupboard, you could buy a good cupboard that had undergone some horrible mutation, such as being cut in half to make it possible to carry up the stairs to the attic where it was relegated to hold the out of season clothing.  Yes, it happened.  People would take a perfectly decent cupboard and buzz it right down the middle (as illustrated below). There were also cupboard faces or fronts, which had somehow lost their bodies, or in some cases were the front of a built-in which may have been saved when they tore down the house and the rest of the cupboard was lost.  There were also lots of doors, both in pairs, and singles, and good bodies of cupboards missing doors.  You name it.

So this situation combined with an interest in doing a little creative woodworking led me to buy a couple of likely candidates for restoration. I determined that I would do the work to bring them as close to their original glory as possible. Using period tools and materials, I replaced missing parts, and would either paint to match the rest of the cupboard, or if the paint as found was not original or particularly interesting I would repaint the whole cupboard to an appropriate for the period colour.

Here we see a good before and after example  You can see that this nice large cupboard was run through right up the middle but the two halves retained all the important parts.  The doors, and side panels, hinges, etc.  It was easy enough to replace the bottom, top, and middle board, and then reproduce from old house trim an approximate and appropriate base and top trim.  Mending the back, top and bottom was pretty simple, and it was ready to paint.  There was no good colour under that lime green so I painted it using old flat oil paints of forest green and turkey red with a mustard yellow accent on the trim.  I then rubbed it down slowly and evenly with fine steel wool and paste wax until it had a slightly softened, or weathered look.

I wasn’t one for rubbing the heck out of the area around the knobs to try to approximate heavy wear.  To me this is always a dead giveaway.  My objective was to be as unobtrusive as possible. Add a couple of period china knobs and it was looking good.  I made it a point to tell potential buyers everything I had done to restore the cupboard and I priced them accordingly.  Some would prefer to wait for something original, but many were happy to have something that looked good, was less expensive and did the job.

On other occasions I would find a cupboard that essentially had good bones, but were otherwise lacking to some degree.  Below we have a before and after of just such a case.  I liked the high waist and form of this little flat back kitchen cupboard but the top shelving was ugly.  It also showed evidence that the haphazard arrangement of shelves on the right were added later and the shadow was still there on the left side where the original shelf had been. 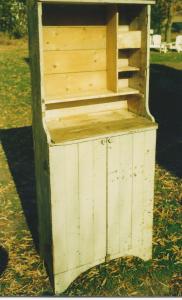 I took out the added selves, replaced the shelf where it had originally been, and added a wavy trim around the openings.  This I admit was an artistic conceit, but damn it does look cute.  There was nothing under the white so I painted it a robin’s egg blue and called it a day. 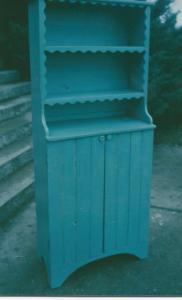 This little green and red cupboard was a special order for a customer who needed a narrow cupboard to hold his cd’s that would fit into a spot between two walls.  I found a suitable door and built the rest out of re-purposed 110 year old pine and house trim.

Finally, this cupboard is an example of finding a kick ass old Gothic door and housing it in something simple that more or less suited it, and by doing so turning  it into a useful piece of furniture.  I didn’t touch the original paint on the door, and made the rest of the paint complement the original.

I enjoyed occasionally doing this type of work for a few years while the market for such furniture was strong.  Mostly for the satisfaction of taking something that had originally been really nice, was screwed up, and then brought back to a useful existence.   After while I just got over it, and went back to dealing in all original pieces.  It was fun while it lasted.