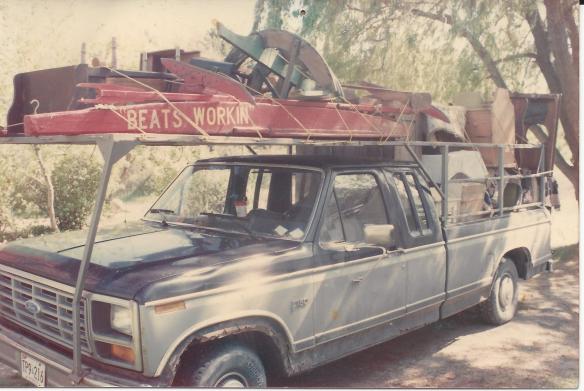 It had been a successful Odessa show.   On Saturday at opening we had just arrived due to a flat en route , and were bringing things off the truck as people came in.  Turns out people get excited by getting first crack at things, and several pieces were selling as they hit the ground.  The mood was jovial and spirited.  Dan Ackroyd and his wife came by and they were attracted to a two piece painted cupboard that they could see glimpses of on the still tied down load.  She told him to stay there until it was unloaded while she went on down the line, and he was good enough to suggest helping me unload rather than just standing there watching me.  Nice guy.  It turned out not to be the cupboard for them, but regular Toronto customers bought it right after, so this combined with other sales indicated a strong start.  It’s a great feeling to sell enough in the first hour that you have “made your table” as the expression goes, and you can relax a little knowing that even if nothing else sells you have had a good show.  It didn’t happen that often even then in the heyday of the nineties.

The day continued to go well in spite of the sweltering August heat, and we even had a few sales on Sunday. So, when five o’clock closing came, we were happy not to have a lot to load back on, although the Toronto couple needed the cupboard delivered to their home, and I bought a few things in the rough to take home.  By about seven we were loaded and on the 401 heading west.  We checked the radio for traffic and found out that things were moving slowly all the way to Toronto due to an accident and so decided to pull off at Belleville for dinner at a place we like down by the marine.  We felt a bit celebratory, and content to relax, sip wine, and eat seafood while looking out over the boats in the harbor, so by the time we finished our espresso it was probably pushing ten before we were back on the road to complete the five hour (in total) drive.  Feeling good and awake thanks to the espresso.   Of course we were younger then and able to stay up past ten.

So everything was going swimmingly. Traffic was clipping along, the CBC was playing an interesting documentary, the windows were down and the breeze was cool.  We hit Toronto about midnight and I was enjoying the fact that all four express lanes seemed almost empty.  Occasionally a big transport would go whooshing past me in spite us traveling at 120 Km per hour.  I was “in the zone” and enjoying the oddly luminescent mercury vapor lighting and passing cityscape when suddenly there is a pick-up right behind me flashing his lights, and hitting his horn.  “Alright already.  Go by me there’s another three lanes.”   What is with this guy?  Next thing he has pulled up right beside me, and a guy leans out the window and screams “Your truck is on fire!!”  Whaaat?  Looking in the rear view I see flames flaring up into the night off the top of my load and realized he’s right. Yikes! It was several minutes before I could pull off safely, all the while watching the flames get higher due to the combination of plenty of oxygen , and all that dry 100 year old wood.  I jumped out and surveyed the scene.  Indeed, I could see that at least three things were on fire and several blankets had ignited, and of course all this was tightly secured by ropes which are also on fire by this point. The situation looked dire. First things first.  Jeanine was by this point sleeping, and was not at all pleased to be woken up with the news that it was time to abandon ship and run for your life.  We both ran down into the ditch thinking that at any moment the thing may blow just like in the movies.  Then slowly reason supplanted panic, and we realized that the pieces on fire were up on top and we would have to stand there and watch it burn for a long time before it came anywhere near the gas tank.  Let alone heat up the steel of the truck bed enough to ignite anything, so we got busy and started untying things as fast as we could, throwing the burning blankets and ropes into the ditch and stomping them out.  My kingdom for a fire extinguisher.  I have always carried one thereafter, and so there’s a cautionary tale for you.  Other than gloves, all we had to fight the fire was a couple of large bottles of water which we saved to pour right on the burning wood parts of the furniture that had ignited. We unloaded and stomped and smothered for about fifteen minutes which seemed an eternity and before you knew it, the flames were out. The fire was mostly in the blankets as it turns out, and we quickly assessed that only three pieces of furniture were seriously damaged.  Unfortunately, one of them was the sold and paid for cupboard to be delivered to Toronto.  We sat in the ditch for several minutes making sure all the fire was out, as the traffic roared by quite oblivious to our drama.  Nobody stopped and the half expected police never showed up.  We settled our nerves, and tried to figure out how such a thing could happen.  Our best guess was that a trucker had thrown out a lit cigarette and it had landed in among the blankets.  A close call, but half an hour later we were reloaded and back on the road heading home, feeling grateful that things had not gotten worse.  The insurance paid for some of the damage.  Giving us the money we had paid for the cupboard before restoring it, and not the amount we had just sold it for.  However, something is better than nothing.  The hard part of course was phoning our good clients in Toronto and having to inform than that their beloved cupboard had met a deathly fate on the road home and we were tearing up their cheque.  Very nice folks, they were quite understanding although they didn’t entirely believe that we hadn’t sold the cupboard for more money and then made up the story, so they accepted our invitation to come out and see for themselves.  They were quite reassured when they saw it and marveled that the fire had not spread further to destroy more of the load.  We felt the same.  We were able to come up with another cupboard for them, and no one got hurt so I guess you can say that all’s well that ends well. Still, I would advise that get yourself a fire extinguisher, especially if you carry furniture on an open truck. The moment may arrive when you would give your left arm to have one, God forbid.