What is it that would cause a teen age boy to attend an estate auction on a sunny Saturday afternoon , when he could be going to the beach with friends?  Thinking back on my sixteen year old self I remember that I found time for both, and that as soon as I discovered them, I enjoyed attending auctions.   Initially I think it was the “game’ aspect of watching two or more determined buyers going at it, trying to outbid each other to win that desirable object.  . Although not inherently materialistic, I find it interesting to observe the dollar value of things on any given day, and compare it to my estimates of it’s worth.  Also,  an auction presents an opportunity  to be among strangers, and observe their interplay.  Something I also love about public markets, both of the food and antique variety. And finally  of course there is the stuff itself.  There, spread out across the yard lie the components that taken together represent the life and  possessions of an individual, or family.

When I turned sixteen my Mom inexplicably and without warning bought me a brand new Vauxhall Viva station wagon.  She and my Aunt Marie were visiting a car dealer friend, and it must have been a heck of a good lunch, or a sweetheart of a deal because they came home with the news that they had both bought a car. One for me, and one for my cousin Ron.  We suspected that alcohol was involved, but naturally we were delighted all the same.  So I had wheels, and occasionally, a local auction advertisement would catch my eye, and I would take some of my hard earned  cash and set off to see what I could score.  Hard earned being the correct term in that I had a summer job on the night shift at the local canning plant.  I worked in the cooking area.  About 100 degrees, steamy, and loud for eight hours.  Minimum wage.  I learned to get by on about four hours sleep so I could have some fun before going back into the abyss.

I didn’t need anything of course.  I wasn’t setting up house or starting a shop.  I would just find myself interested in certain things.  A naive painting.  A primitive, handmade table, a chrome ashtray stand with an airplane on top.  An old plastic radio. The ephemera of interesting small things dumped from a keepsake drawer into a box lot. I loved to sort through it all and find the unexpected. I realize now that as I was looking over all that stuff I was developing my aesthetic.  I didn’t give a hoot for all the fussy glass and china and Victorian furniture , but I started to love the look of old paint, and hand wrought things.  I decided what of the paintings, if any were of interest.  I grew an appreciation for rusty old farm tools.

I didn’t even bid all that often, and when I did I would fall out early as I didn’t have a lot to spend. But I would usually come home with something.   A little gem unnoticed in a box-lot, or something so off base and goofy to most people that no one else wanted it.  I seemed to score a lot of funky, handmade furniture.  Nobody wanted that stuff.

After a few auctions you begin to notice who the dealers are.  The ones who stuck out from the crowd by how often they bid and won,  seemingly without matter of the cost.  In our area there was Madge Wilson, of Grannie’s Boot who incidentally is still  in the business today, and Don Palmer, legendary picker form the Aylmer area.   On anything of great antique value these two would very quickly leave everyone else in the dust and battle it out between them.  They both had great knowledge and taste so I learned a lot by just observing them.  On something I really liked  I would try to outbid them, but I would rarely win.  I don’t think they liked the idea of encouraging a young upstart, although they would very occasionally throw me a bone.  Still, I would most often leave with something, or a few things in the back.

In Dresden, where I was raised we had a Two car garage.  My mother rightfully insisted in keeping her car indoors, but didn’t mind having things stored temporarily on the other side.  When we sold the newspaper business, I decided to keep a few things.  I noticed one day that the bottom of the trays used to store type were made from very old hand carved wooden plates for making  circus posters.  These approx. 2’x3’ works of art showed wild animals, acrobats etc. with a place blocked out to include the local time and place.  They had remnants of the old ink soaked into the wood.  They were very old, and they were fabulous. 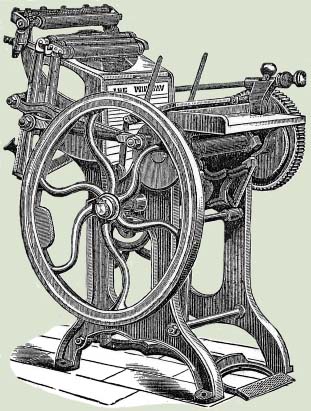 I also had a circa 1840 hand feed rotary printing press.  Quite small, but weighing about half a ton.  Then there was a lot of old hand carved type, etc.  So it did not take long for my space to fill up.  That’s when I met my new, old friend Dan.

Dan was always at the auctions.  He was the friendly looking, disheveled  old dude who would give the auctioneer a $2 bid when he need one, and would go home with twenty or so boxes of old tools, hardware etc. and the occasional piece of unwanted furniture.  I got to talking to Dan over coffee as we were checking out the preview.  He was a nice guy and generous by nature.  Since his wife’s death some years earlier Dan had lived on his own on a small hobby farm at the edge of town.   Just a few blocks from my house along the river road.   One day Dan asked me to come by for coffee and he would show me his barn.   I got myself right over there.

After coffee and a chat in his kitchen we went to the barn, and when he threw open the doors I was truly amazed with what lay before me.  There arranged on rows of tables and in cupboards lay thousands of sorted everyday items.  A box of cork screws here, next to kitchen devices, beside hand tools.  You get the picture.  Then over there are stacks of furniture, old bicycles, and a couple of cars including a big, black 1957 Cadillac limousine.  Wow. “Where did you get the limo, Dan”.  Turns out it was the governor of Alabama’s, and he had bought it cheap because the engine was seized. Knowing that I was running out of space he offered me a 10’x20’ space in exchange for helping him once a week to move and organize things.  I liked Dan and had no trouble agreeing to the terms.

Within a couple of years this space was also quite full, but my high school years were drawing to a close and soon I would be leaving town to pursue higher education.  My mother was wanting the other side of the garage back for storing her picnic table in the winter, etc. and I didn’t want to leave my old friend Dan with a problem.  By this point he was finished with going to auctions and wasn’t leaving the house much.

Realizing the game was almost  up, and not wanting to leave a burden on his kids, Dan phoned a local junk collector he knew and sold it all for one money on the understanding the guy would clean out the barn.  I was just about to leave home for London, Ontario so I told him to go ahead and sell my stuff as well.  There was some cool things in there, but there was also a lot of junk.  I think I got $800 for it all which was probably about what I had spent, and which came in handy to buy books, etc.  The stuff in my mother’s garage lasted about another year until a professor from a Chicago University with a printing studies program  found out about my old press and came racing over to sweet talk my mother into donating it to the library there.  Oh, and he’ll take those old Circus printing plates as well.  They had a deal when he agreed to take everything.  I couldn’t really be upset as I had left the problem unresolved for so long, but I still think about those Circus plates from time to time.