A couple of years after moving to the church, about 1984, Jeanine noticed a small ad in the local paper advertising an auction of cottages in Port Dover.  The Arbour cottages had provided many families a cheap and fun summer home at the beach since their construction in the mid 1940’s, but they were small, and basic, and had fallen out of favor after forty years of service so it was decided by the owners to get rid of them and build a super miniature golf course in their place. 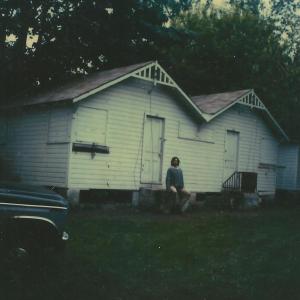 the “workshop” cabins in their original location

Well, it just so happened that we needed out buildings.  When we bought the place there was a very rudimentary workshop, and a sad little chicken coop not worth saving, and so we were planning to spend a bit to build a good workshop, with storage, and a building for the lawn mower, etc. So this seemed like a possibility to buy premade if the prices didn’t go too high.

The auction was set for 10 a.m. Saturday morning and I had to be at another country auction to buy stock, so Jeanine went to see if she might buy one, or with any luck two.  We knew that they were well made, and several were smaller, about 10’x10’ so in theory they should be easy to move.  Small enough to go under hydro lines. There was about twenty of them in all spread along two rows. 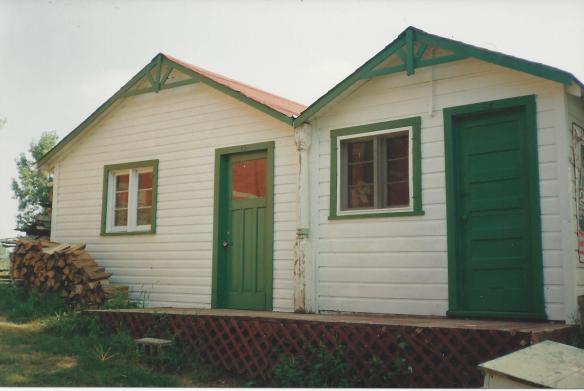 The cabins installed on our property

We were very do-it-yourself oriented in those days so after examining the situation we settled on a plan of borrowing our apple farmer friend Sergio’s large, low lying, flat-bed trailer.  We would jack the cabins up onto a tower of blocks high enough to drive the trailer very carefully underneath, between the concrete pylons.  Then it was simply the case of dropping the building onto the trailer and driving it the 40 kilometer distance to our place.   Our farmer friend and neighbor Dave offered to help and he had a big 8-cylinder heavy duty pick-up truck he thought we could use to drive them over.  What could go wrong?

I’m here to tell you that jacking up a building one side at a time and slipping in concrete blocks before going to the other side and repeating the process, is a pretty hairy business.  It seemed that it was always teetering on the brink and just about ready to drop, so you were super prepared to jump out of the way to save life and limb.  But somehow we were able to accomplish it with a lot of encouragement from Dave, who was rough and tumble and did this sort of thing all the time.

So we arrived at the moment when Dave, being our expert driver, very slowly lined up the trailer in front of the first cottage, and with his window open, cigarette dangling from his lips, looking back and forth between his two mirrors, managed to back it right up to the back of the cottage without touching the pillars on either side.  This was a masterful performance considering he had less than 3 inches grace on either side to play with.  Well done Dave.

Dropping it on the trailer was no problem, and after securing it we were ready to take our first cabin out of the park and over to the church.  No permits of course, but if they stopped us we were prepared to see just how far we could get with the argument that we had farm plates. Dave said you can do practically anything if you have farm plates. We did have a car in front with the blinkers flashing after all, and someone behind as well.

It went pretty well at first.  The truck seemed to be struggling a bit to get it moving, but we managed to pull out onto to the road and make a quick right, which was when we discovered that the Port Dover hill is a lot steeper than it looks.  The truck was in it’s lowest gear and it only took a couple of seconds to realize it just didn’t have the power to get this baby up the hill.  Yikes. Nothing to do but retreat.  One of us had stopped the traffic behind, so Dave was able to back into the Cabin park again and pull it a bit out of the way.  Hmm.  We needed a bigger gun.  So it was decided to call a friend of Dave’s who had a tow truck.  Within an hour he was there and hooked up, and with the extra power we had no problem getting up the hill and down the back roads to our place in Wyecombe. He charged us $75 for the trip.  We had a system.  Now all we had to do is get the thing off the trailer and go for number two.

As it turns out that was the tough part.  Not the lifting it up so the trailer could come out so much as the bringing it back down without tipping it part.  I think we managed to drop every one of them at least a little bit, but they landed roughly were we wanted them to with no damage and no one’s foot underneath.

We managed the 10’x10’ cabins well but there was a larger one about 16’ x 16’ that was too large for the trailer.  I went about trying to line up a couple of longer I beams to move it on, but nobody had any available so we had to resort to plan “B”.  Plan “B” was to simply take a chain saw and cut right down the corners of the building allowing us to lay down the individual sides on the trailer.  We just tore off the roof and trashed it. Worked like a charm.  We reconstructed the building by reinforcing the corners and built a new roof and it was as good as new.

Within the thirty days we managed to move the two buildings which went together to form our workshop and storage, a play cabin for our daughter Cassandra, a garden tool cabin, and we gave one to Dave for his helping us.  Realizing we didn’t need any more we sold the remaining one to a gent who had turned up too late for the auction and dearly wanted one.  We had a lot of refrigerators, stoves and funky furniture which disappeared pretty quickly as the local tobacco farmers were always looking to cheaply equip their summer help cabins.  We managed to recoup the cost of purchase from selling the contents, and in the end had four great outbuildings for less than $500.  Plus, we ended up with all our toes and fingers.  Bonus.