About 30 years ago we were rooting around in Alain Chauvette’s pickers barn near Victoriaville Quebec when we happened upon a wonderful carving of a Montreal Canadien goalie.  A serious dude with a square head and a look of determination which would intimidate even the most veteran opponent.  We loved it and bought it for our own collection.  I’m looking at him right now and I’m still impressed with the expressiveness of his rough cut features, and the immediacy of the carving.  Problem was, he wasn’t signed.  We asked Alain if he knew the carver, and he did not so we had to be content to have found this one great piece by an unknown carver with the possibility of never knowing the maker, or seeing other work by him.  Then about six months later we found a carving that was obviously made by the same hands of a group of four cows, carved all in one piece in the round.  The same roughness and directness as the goalie.  This time it had the signature A Laporte on the bottom.  The picker still did not know the carver, but at least we had a name to go on.

a group of cows by Andre Laporte

So fast forward about fifteen years later.  We have found and bought another half dozen pieces by Mr. Laporte, all with the same strength and spontaneity of our goalie.  Still no one knew, or admitted to knowing anything about the artist.  Remember that any picker is extremely reluctant to put you in touch with a carver because then you buy from the artist and not them, so it is counterproductive.  Still, we were happy just to find the pieces and realize that the artist was most likely still active. 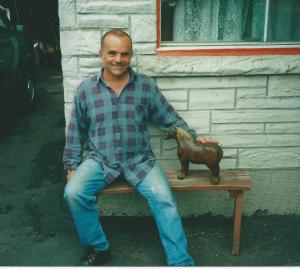 Andre sits on his front bench with his first carving

Then came that lucky day when by going through the phone book in La Prairie, and we found and met the carver Leo Fournier.  We were enjoying our conversation with Leo when his wife came into the room and said “Leo, Andre Laporte just phoned and I told him I would have you phone him back after you are finished here.” Eureka!  “Would your friend Andre Laporte be a carver by any chance?”  Why yes he is, a carver and an antique picker.  He lives a few miles from here in the town of Verdun.” “Would you mind giving us his phone number”. “Not at all.  I’m sure he would be happy to meet you”.  So before we left Leo called Andre back, gave him the scoop and put us on the phone.  It was late in the day, so we made arrangements to arrive at his place at 9 the next morning.  After getting directions Andre said “No one has ever wanted to meet me before.  I don’t have a lot of work to show you so I hope you are not disappointed. “.  “Not to worry Andre, we love your work and will be delighted just to meet you , and if you have anything to show us, that’s good too.

Next morning after a hearty breakfast we arrived at Andre’s little house by the railway tracks precisely at 9, and there was Andre waiting on a bench by his front door.  You could see he was both excited and a little anxious. After exchanging greetings, we went inside and met his wife Lucie.  The place was small but filled with nice things including several of Andre’s carvings which were brought out and put on the dining room table.

A man enjoys an apple while his faithful dog looks on

Leo had briefed him on who we were and he was excited to think that we would be interested in him.  “So you actually like my work?”.  Why yes, we like it a lot. You have a unique style and energy which we find very attractive.”  “The other pickers who come by tell me my works too rough and nobody will want it, but that’s the only way I can work. “You see this horse there.”  We focused our attention on a very strong and expressive work horse. “That was my first carving.  They took down some hydro poles about seven years ago and left them across the street.  I cut up one of them into various sized “stumps”, and brought them home to burn, but then I started to look at them and after a while I saw this horse inside one of the stumps.  I thought about it for a long time, and then one day in 1984 I  just started chipping away at it, and after about ten hours this horse had emerged. That was it.  I was hooked. That’s the way I’ve worked ever since.  I see the form in the log, and then I carve, until I get it all out”.  I don’t glue pieces together or sand them more than I have to.  I like them rough and close to the way I see them in my head.” I can only work when I see the piece in the wood first, and then I can’t stop working until it is finished.  At this point Lucie jumps in.  “that’s right.  Once Andre starts to carve I know I’ve lost him until he is finished.  I drew the line when one night he put an old quilt on our bed and started to carve right there.”

Andre represents what it is to be a natural, instinctive carver.  With no training or even having much experience of other work, his work is truly inspired and highly individual. His work deals with what is the pure essentials of his subject.  There is always a sense of vitality and movement.

We bought several pieces that day including his first carving of the horse which remains in our collection.  We continued to go by Andre’s place a couple of times a year for the many years that we continued to travel to Quebec, buying most of his output each time.  Even after we stopped going we would talk on the phone occasionally and he would describe what he had been working on.  Often we would send him a cheque and he would mail us pieces sight unseen.  Andre and Lucie have a hard life.  He was born in Verdun on May 20th, 1948 and has lived there all his life.  He has barely eked out a living being an antique picker of the door knocker variety.  For a while things went well for him when collector Pierre Laplante was buying almost everything he picked, but then they had a falling out and that stopped.  Andre and Lucie have three daughters and one grandchild. 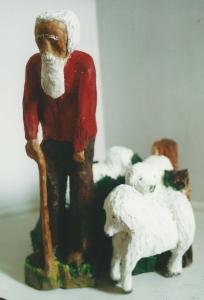 an old man and his sheep by Andre Laporte

A few years ago I called to see how he and Lucie were doing and he informed me that sadly one of their daughters had been in a terrible car accident was grievously injured, and that now he had to take her every day to the hospital for treatment. There was never enough money in what Andre does to make a happy and secure life, and I’m sure that without the love and support of Lucie and his family he would not be able to survive. The last time I called was in 2007 when our mutual friend Leo Fournier died. We had a great chat about Leo.  How he was his own man, and Andre laughed and summarized it like this “I have always admired Leo.  He lived exactly as he wanted to, and never cared what anybody thought. He loved to drink and he died drunk.  It couldn’t have been better for him”.  I don’t know how things have gone for Leo since.  I should phone him.  That last time we spoke he said he hadn’t made any new work in a couple of years and he was still mainly preoccupied with helping his daughter to get back to a happy and productive life.  He and Lucie are the salt of the earth.  I really hope that things are getting easier for them.  He has real talent that in a better world would be enough to provide him and his family with a happy and secure life. Unfortunately, it rarely works out like that for artists in the world we live in today.

Andre surrounded by his creations

2 thoughts on “The “spontaneous” vision of Quebec carver Andre Laporte”