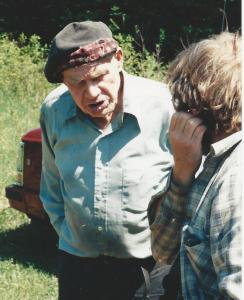 Throughout the nineties I continued to visit Bill when I would get to the Muskoka region.  This was fairly often because at the time I was getting a lot of fresh picked stock from Scott Beasley and a couple of other guys in the region.  Over repeated visits I was able to buy more of his carvings, just a few at a time, and I got to know more of Bill’s story.

Billie Orr was born in Tyrone, Ireland in 1912, but he came to Canada with his parents when he was six months old. The family settled in Muskoka, and when Bill was sixteen he went to work for the railroad. Then in 1936 he started to work at the Muskoka Sanatorium in Gravenhurst where he was employed for several years as chief engineer.

Bill continued to live on the family homestead in a log cabin all his life until shortly before his death in 1998.  About fifty years ago Billie planted a tree circle behind his house and started to make Irish and Zodiac figures in cement. He placed his figures within this “magical” circle. He said he did it for the amusement of the moose. He made friends with and tamed many wild animals. He loved Ireland, and would return many times on his own to travel by bicycle and hike throughout the countryside. When he returned he would publish accounts of his travels in the Muskoka paper.

a copy of Bill’s article

In the fall of 1997 I dropped by Bill’s unannounced, and for the first time he wasn’t home.  I thought I had just missed him and he had gone into town, so I left a note and thought nothing more about it.  A couple of weeks later I got a letter from Billie.  Sadly, he explained that he had fallen ill with a bad heart and that after a stay in the hospital he was forced to move from his beloved cabin into Orillia, where he had a sister in law who helped look after him.  He gave me his new address and phone number.  It was sad talking to him, because although he remained up-beat, he stated that he would now have to stay in Orillia near his doctor and that he would never again see his cherished home in Purbrook. He ended sounding upbeat, and he told me that before the attack he had finished a half dozen new carvings and if I could get up to see him he would sell me a couple. This was in February of 1998.  I  said I would be up to see him, as soon as the good weather came in the spring.

Well, one thing lead to another, and spring came and went and I think it was mid-summer before I was ready to head up north. I called Bill’s number to tell him I was coming. Billy’s sister in law answered. I was shocked to learn that Billie had died not long after I talked to him.   I was too late.  I felt terrible for missing my chance to have one last visit, but I had convinced myself that he was on the mend.  His sister in law told me that the property sold right away and was being developed. I knew this meant the end of the circle of trees, and the magical world of zodiac and Irish creatures. When I had expressed my condolences and hung up the phone, I felt I should rush up there immediately and try to save the concrete menagerie as I feared they would likely get bulldozed into the ground the minute they got in the way.  Then I thought about it a bit more and I didn’t go.  I knew in my heart that it was too late, and decided I would rather remember it the way it was.  I once brought along a VHS camera and taped a visit with Bill.  What I must do before it deteriorates is get it transferred to digital and have it as a record. Bill was a special man, and in his own right an inspired artist, both in what he created, and the way he lived.  When I did the Outsider Art fair in New York City, I brought pictures of Bill’s place, along with many other examples of Canadian folk art, and showed them to the renowned art dealer, Phyllis Kind. She passed over much of what I showed her, but paused and really had a hard look at Billie’s work. She said “This is interesting.  I’d like to know more about this artist.”  When I got home I sent her photos, a bio, etc, and after a couple of weeks she phoned me to  say that she would be interested if Bill would sell all of the work and she could show it as a reconstruction of Bill’s installation. Naturally she was concerned about the cost of moving all that concrete to New York.   I got in touch with Bill but he wasn’t at all interested. I could tell that for him it would be like selling his family.  Still, Phyllis is no slouch when it comes to art, and her interest reaffirmed my belief that Bill Orr was an exceptional individual and artist; and he was a lovely man to boot.

One last little story.  I got back from a Muskoka trip once and in going over my finances I realised that I have inadvertently underpaid Bill by ten bucks. I can be a real idiot with numbers sometimes.  In any case, I wrote him a letter of apology, and sent him it along with some photos I took of his pieces, and the ten bucks I owed him. I received the following note by return mail:

Thank you very much for the letter and the photos. The Colleen Dubh takes a good photo due a lot to the surroundings, especially the honeysuckle bush.  Thanks for the ten dollars. I noticed the error but didn’t want to say anything.  Thanks a lot for the correction.