It’s a beautiful last day of summer here in Port Dover with sunny skies and a temperature rising to 30 degrees this afternoon; and tomorrow being the first full day of fall promises to be the same.  A perfect day to attend the Aberfoyle Fall Antique show.  The last big out door show of the season.  Aberfoyle, near Guelph Ontario has been going for over 55 years as a Sunday market hosting 100+ quality dealers selling collectibles, folk art, furniture, and more. It is open every Sunday from the end of April to the end of October. Their spring and fall Saturday Special Shows welcome an added 90+ dealers to the market.  It runs from 8 a.m. until 4 p.m. and like any  show if you want a swing at the good stuff you’ve got to be there early. 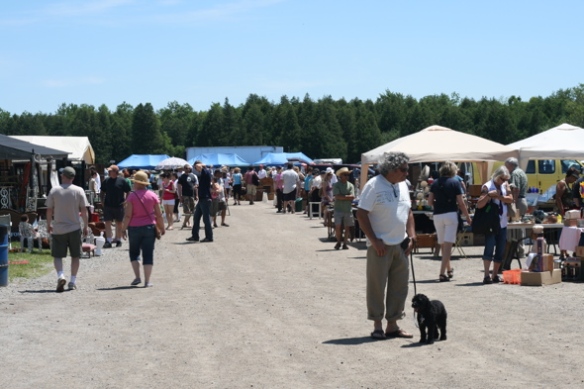 I did the spring and fall shows for years and always looked forward to strong sales, and an opportunity to buy some great items.  As a dealer you could arrive as early as you want, with many arriving the night before and camping over.  Being just a little over an hour’s drive from our place I always preferred the comfort of my own bed, but I would set the alarm at 4 and make sure I was on the field and unloaded by 6 am. This not only to catch the early dealer sales as the sun rises, but also to be there to follow the trucks as they come in.  There’s nothing quite like the thrill of sipping on a coffee in the last moments of darkness before sunrise, and shining your flash light on to a big, tied down load of antiques as it rolls slowly by you on its way to its spot.  If you see something you like you shout out for a price from the dealer who inevitably has his window rolled down in expectation.  “Just picked it in the valley.  She’s right as rain, and it’s yours for $300.”  O.K. it’s sold, and I’ll be by later to pick it up and pay you.  Many pieces were sold this way so you had to be on your toes. 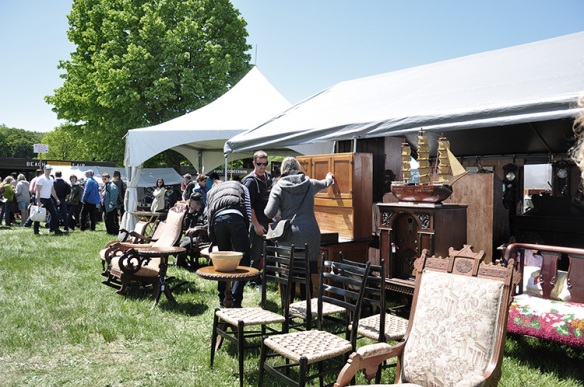 In the year 2000 Jeanine’s brother Gerard, and his wife came to visit us for three weeks in the fall. A retired engineer, Gerard dabbles in buying and selling antiques and has become a dedicated collector of French Dinky toys. When we are in France we go to the shows together and he is basically a jump on board kind of guy, so I asked him if he wanted to get up at four in the morning and go with me to participate in the Aberfoyle fall show.  No question. You bet. So on Friday we loaded the truck, made our lunches and went to bed at nine.  Four a.m. Grab a coffee, get in the truck and we are off.

Gerard at times can be a serious guy, and generally he is a quiet, intelligent and thoughtful sort, but on a run like this he is a riot.  Light-hearted, mischievous, and a lot of fun.  I always see a bit of Bill Murray in him in spite of the different cultural backgrounds.  He likes to claim that his English is “pretty good” but in fact his English is about like my Spanish, almost nonexistent.   On this morning it didn’t stop him from approaching everyone in his Broken English and applying a hilarious attempt at a sales pitch.  “Yes, look here this beautiful dresser back.  It’s lovely for you, no?  etc.  You get the idea.  Some people would really lighten up and get into it when they realized he was a visiting Frenchman, and some would look helplessly over at me with a “what is going on?” sort of glance.  We were a good team actually.  When things got busy he started to complete sales after asking me if an offer was acceptable.  We had a sort of good cop, bad cop thing happening.  “she’s a nice lady boss, can’t she have it for $100.” He pretended I was the boss and he worked for me. He really fell into the part. The day passed quickly.  When the  afternoon lull came Gerard took off to comb the field for dinky toys.  Although he found several, I think he only found one or two from France and I don’t think he bought either, having better examples at home.

As four in the afternoon rolled around and we loaded up the van to go home, as it is with all the outdoor shows a full, long day in the sun takes it tole, and we were a couple of pretty exhausted campers.  But the thing I remember is that we were happy.  It’s funny how seeing an event through foreign eyes can make it new and exciting again.  It was like that, and it will remain in my memory as a very happy and special day together with my beau-frere.

This hits my consciousness today because I recently had a friend recover a lot of old photographs from a crashed computer and there amongst them were the pictures of Gerard’s last visit here in the year 2000.  Topping that is the fact that he is arriving with his wife next Friday for another three week visit.  It’s too bad it’s one week too late to go the Aberfoyle show together to look for Dinky toys, but I’m sure we’ll have lots of other kinds of fun.

Gerard, ready and willing to serve you.