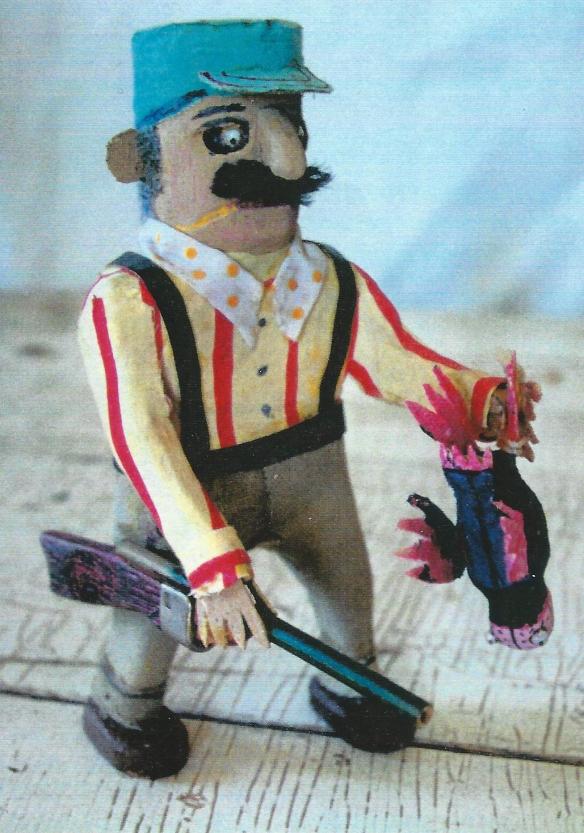 We first encountered the works of Steve Sutch in the late 1980’s at the tobacco museum in Delhi, Ontario.  It came as a total surprise.  Although we lived nearby we had never visited the museum as we were busy setting up house, and when we finally got to it one sunny summer afternoon we were amazed to find a large display of delightful carved/constructed work by this self-taught local artist. It was a show/sale and sadly for us, most of the pieces had already been bought.  It was easy to see why considering the quality and charm of the pieces presented, all at relatively low prices.  We bought everything that was left.

His sense of humour and invention was evident in all of the works presented, but the show did not include any drawings.  Over the next few years we occasionally ran across another construction, but it wasn’t until 1995 when we bought Barbara Brown’s collection that we were delighted to discover a package of about thirty Steve Sutch drawings. His constructions, and occasional piece of original furniture are good, but his drawings are amazing.

Steve Sutch’s Hungarian parents emigrated to Canada in 1905, and homesteaded in Saskatchewan where Steve was born in 1907, near Regina. He also homesteaded in that province, near Spiritwood, where he made a living working in logging camps and sawmills.

In 1937 he moved to Ontario, eventually settling down in Brantford where he remained until his death in 1992. He found employment in various areas of industry and agriculture, working on the railroad, factories, and tobacco fields. It is only after he retired from his very laborious life, raising two sons and three daughters, that he took up carving and drawing.

table designed and made by Steve Sutch

As stated, Steve Sutch did not limit himself to the carving and painting of wood. Most of his sculptures incorporate some mixed media feature, such as clothes made of actual pieces of fabric, and yarn used for hair. His pieces are constructed as much as carved. In his last few years Steve Sutch concentrated more on his drawings, which are mostly crayon and markers on the back of cereal boxes, or any scrap of paper or cardboard available. It is in the drawings that he let his imagination run wild, very often writing captions to explain the contents. These captions, if she judged too daring, were erased by his wife. She missed a few. 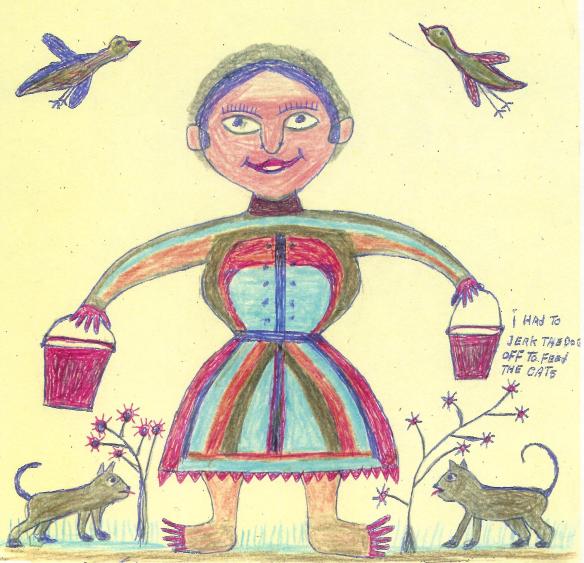 We framed and took the drawings we bought from Barbara to the April Bowmanville show, and the following January to the Outsider Art Fair in New York. They sold like hot cakes and were bought by many serious collectors.  This confirmed our belief that Sutch was a top drawer artist of the cartoon persuasion.  His drawings are edgy, sometimes outrageous and even at times profound. They all contain humour and insight.  A lot of them deal with fate, and the food chain. “Make all chicken’s happy, eat pork” etc.  In the May/June 1992c edition of the Upper Canadian, folk art collector and scholar Michael J Hennigan wrote an excellent and insightful four page essay on Sutch’s drawings. If I can gain permission to do so,I will post it here in a future blog. 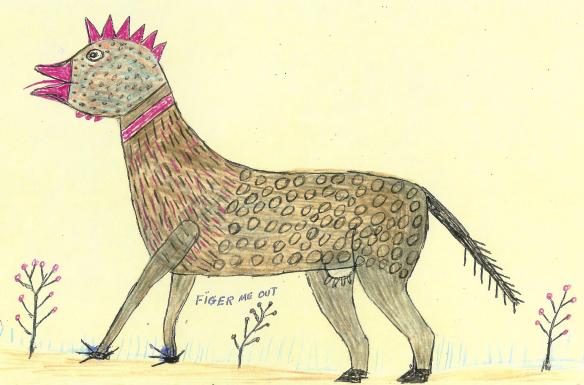 Steve Sutch’s work demonstrates a very strongly individualistic interpretation of a full life’s experience; a commentary on relevant current events (such as portraits of political figures), as well as imaginative tellings of fantastic and sometimes wicked or naughty stories. Steve Sutch approached his work with a great sense of humour which permeates every piece.  I will close by reproducing a short autobiography written in his own hand which Barbara Brown had the insight to ask him to produce in 1989, shortly before his death in 1992.    As Steve says there, “This is all.”

2 thoughts on “This is all – the work of Steve Sutch”