We unfolded ourselves slowly out of the truck after the grueling ten-hour drive from our home in Wyecombe Ontario to Alan Chauvette’s picking barn near Victoriaville, Quebec.  We were met by a particularly animated Alan. He was excited, even for Alan who tends to run a little hot.  “What perfect timing.  I’ve got something exciting to show you.  Follow me to my house and we’ll come back here after”.   Ten minutes later we are entering Alan’s back yard and everywhere you look there are chip carved, splatter painted, flowers, birds, and other wildlife generally with a large figure at the center and a multitude of smaller components coming off in every direction.  Wild.   The total affect was that of a fantasy garden.  We were mesmerized. 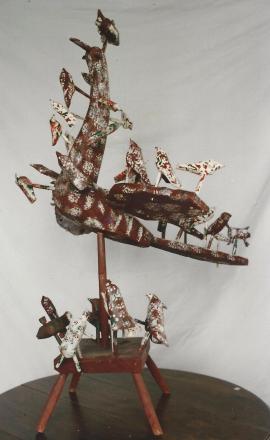 “They were all made by this crazy old guy in St. Isidore de Beauce who covered his yard completely. He’s gone into the retirement home and the family is selling the house, so I got them all.”  We were still looking around trying to take it all in.  “As you can see there are hundreds of pieces and I am selling them all as one lot. None of this picking the best, and leaving the rest.”  I was almost afraid to ask the price, but had to.  Alan gave me a serious look and a number in the high four figures. It was pretty much what I expected due to the quantity, but the first thing that sprang to mind was “We think it’s wonderful, but I wonder if anybody else will.  This is pretty eccentric stuff.”   We looked at each other for a moment, then I said to Alan.  “We’ll discuss it on the way back to the barn and give you an answer there.”  That was a pretty intense ten minutes that followed. We both loved the work, and “got” that his complex assemblages which could be reconfigured in different ways and still ‘work” was an exciting concept. 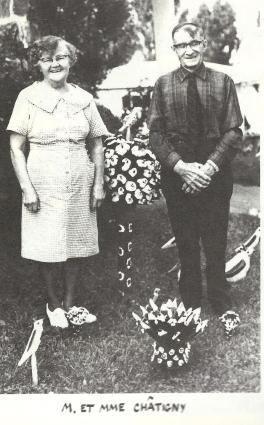 Still, it was a lot of money to put down on an unknown horse. We talked it out and as we pulled in we concluded “What the hell. Let’s trust our instincts and do what we are here to do, so it was all big smiles and laughter, as we concluded the deal.  There were a couple of pickers standing nearby that we saw regularly, and they laughed at us.  “They’ll be burying you with that stuff”.  We didn’t care.  We owned the entire contents of Mr. Chatigny’s yard, and although we had never heard of him, we knew that it spoke to us as so few things do in this life.  We were half way home, somewhere around Brockville before we started to question ourselves.  We needn’t have.  Within a month we had sold enough to pay back our investment, and there was still a good half left.

Edmond Chatigny was born in 1895 in St. Isidore de Beauce, Quebec. He was creative from an early age. “When I was young I used to take a knife and whittle.  My mother used to say “I think you could end up making something”.  He became a farmer. Married and had thirteen children.  Then the day came when he retired.  “When I was on the farm I used to work hard, then when I retired I had nothing to do and I became bored. That’s what decided me to start making little things – wooden flowers, birds, then all kinds of things. I do it with a little saw and a pocket knife. 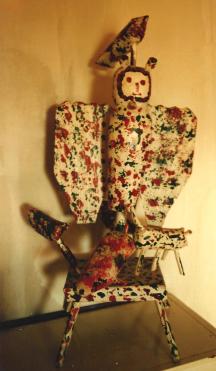 Sell them? They are not sellable. They are not made in a minute. It’s all green, white and red with a little brown. This year I think I am going to put a lot of green and white.  In the summer when I cut the grass, I clear them all off, then I put them all back.  It takes two days.” 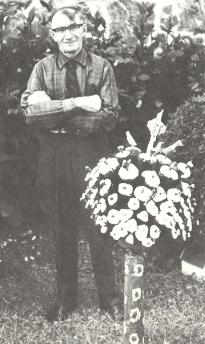 Although I never met M. Chatrigny, I am sure that it would bemuse him to hear me say that I think he was a uniquely innovative, and an important artist in his own right; and since I first laid eyes on his work, until present day, he remains one of my favourites. 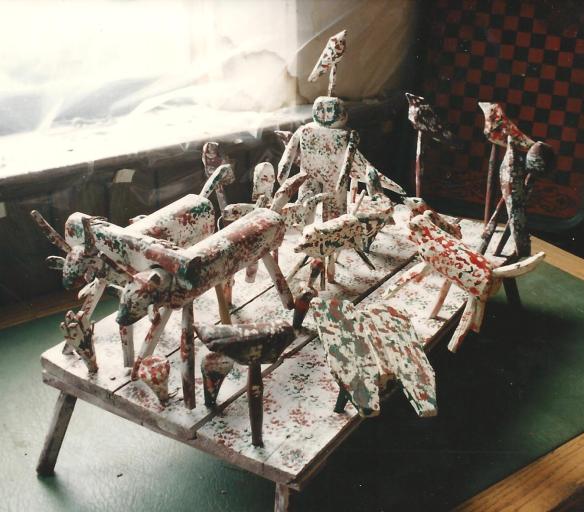 4 thoughts on ““It’s not saleable!! It doesn’t get made in a minute” – The art of Edmund Chatigny”