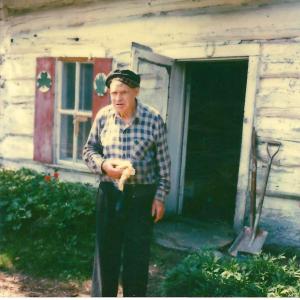 Billy in front of his cabin

Back in the nineties, Billie Orr was a familiar figure in Bracebridge, Ontario.  My friend Scott Beasley would see him at least once a week, shuffling along the street carrying his bags of groceries and supplies, as he headed out towards his property which lay about three miles out of town on an isolated craggy, wooded acreage overlooking a river.

With his perpetual Irish cap, and lower lip which seemed in danger of dragging on the ground, Billy was well known, and universally liked by the locals. Scott took to talking to him, and found out that Billie lived on his own on the property he was raised on, and having a good picker’s instinct, he eventually got Billie to invite him for a visit. What he found was fascinating. A bit later, I happened to be in the area and was interested, so Scott and I headed out one fine summer morning for a visit.

Billie lived in a log cabin with no running water and one electrical outlet on a large remote acreage not far from town.  It was a pretty funky set up.  He had to go down the hill to fetch water, and the cabin looked like nothing had been done to it in several years.  We came down the long lane to the cabin and there was Billy standing in the open front door.  Although old, and obviously used to living alone, he was welcoming and articulate.  He started right in telling us about his upbringing.  His father was an inspector on the railroad, and had built the cabin in the first quarter of the century for his wife and Billie and his sister.  Billie’s sister moved away.  Bill never left.  He never married, and never drove a car.  He would walk into Bracebridge once a week and get what he needed, which wasn’t much.  Bill still cut all his own wood, fetched his water, and grew a large garden so he was practically self-sufficient.

We were chatting away in the main room of the cabin when suddenly a large mother raccoon appeared at the door.  Billie excused himself.  “Good morning little mother.  As you can see I have guests but I have your breakfast ready for you.”  At this he disappears into the kitchen and comes back with a granite plate full of table scraps, and sets it down outside the front door.  Mother raccoon made a friendly, grateful noise and set at it.   We continued the tour.

At the side of the room here was a steep set of stairs which led to the second floor.  You could see that the top steps were completely covered in soot, and Billie explained that he had had a fire up there a couple of years back, but had managed to get it out before it destroyed the place. Obviously he was no longer using the upstairs as it had never been cleaned.  On the steps there were several small carvings of Irish people and little wheelbarrows which Billy had made some years back with a view to selling them to tourists.  I guess he never found a venue for selling them because he had several of them in a row, all covered in a layer of soot from the fire.  “These are cool Billie.  Any chance you would sell us a couple of them.”  “Well, I could sell you one or two I suppose. If you want to buy more, you will have to come back”.  I realised that this was Billie’s technique for assuring a future visit. He obviously enjoyed conversation, and “human” visitors were rare.

Next he took us out back to show us his other work.  There among the trees stood several hand formed cement figures depicting Irish Leprechauns, and Colleens (young women) and several figures depicting the signs of the Zodiac.  Billy explained that he made these free form by placing metal armatures (or skeletal forms) in the sand and then building them up with cement.   They were all wonderful folk art, and a vision to see in this natural setting.  Just behind them Billy had years before planted a circle of trees which grew to a great height and were meant to depict Stonehenge.   What an amazing creation.  I was awe struck.

There is so much more to say about Billie and my subsequent visits that I will continue the story next week in my Friday Blog.   Billie was a true “outsider” in every sense of the word, and I am honored and privileged to have known him. 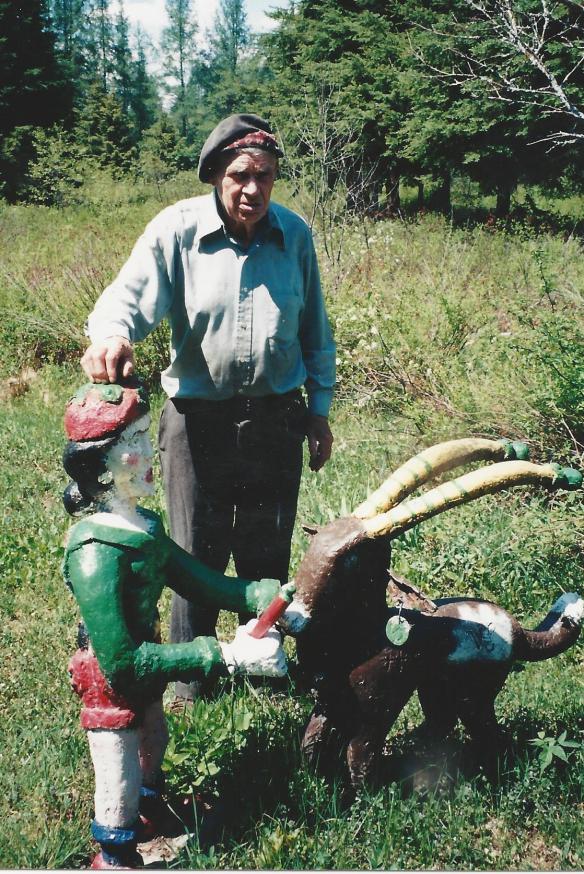