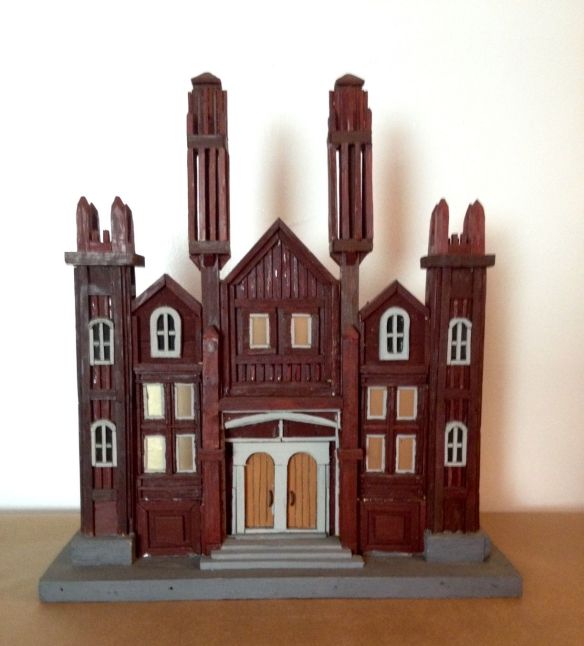 Back in the 1990’s I would occasionally get a call from a friend, Marty Ahvenus, who owned and operated the Village Book Store on Queen St at the time.  He was a book seller by trade who also enjoyed folk art and making periodic trips to the East Coast.  When he returned from a trip he was in the habit of phoning me, and selling me the folk art which he had acquired enroute.  We would meet at a French restaurant on Baldwin Street which offered fish soup, a favourite of both of us, and I remember that the owner/chef would always come out to see who had ordered the soup as so few did.  But that’s another story. 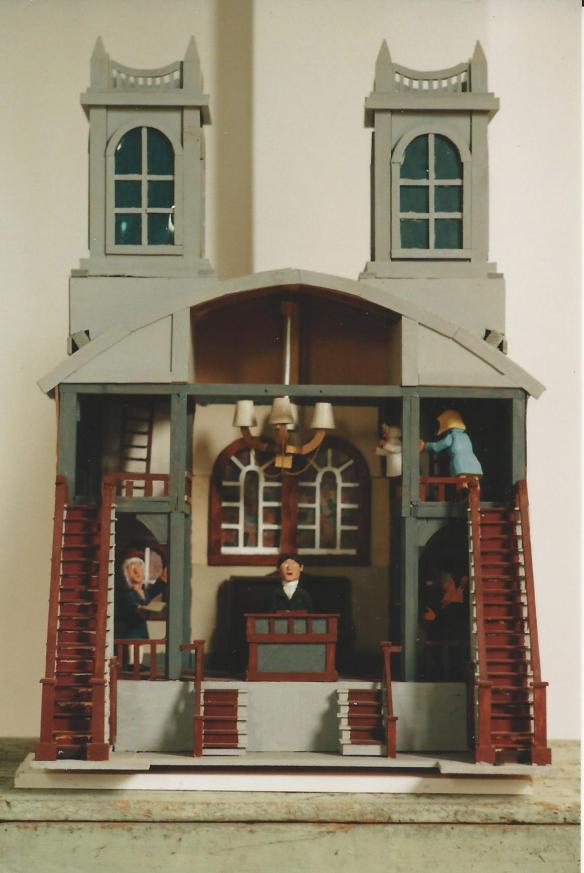 One day I met Marty and he had a dozen or so small and interesting fantasy buildings that he had just acquired from a very elderly gentleman from Wolfville Nova Scotia, who was living with his son in Toronto at the time.  I guess he had heard about him when he was out East and found out that he was living with his son who was teaching law in Toronto, so he arranged to go over and meet him.   Fenton Dukeshire’s son made it clear that Marty was welcome to come over and see the work, but that it was very unlikely that he would meet the artist. Fenton was a very private, and shy man who liked to keep to himself in a back bedroom of the house where he would spend hour after hour creating intricately detailed miniatures of buildings, bridges, locomotives, etc out of bits of found wood, matchsticks, and cardboard.  These all bore the mark of his individual imagination, and the patience required to bring such detailed pieces to realization.  Time was not a problem for Fenton.  He was in his element working, and he did so hour after hour, day after day.  Along with the individual sculptures of buildings, etc. he liked to create dioramas which involved people in dramatic situations.  Gunfighters facing each other down on the street.  A church scene with choir and unnoticed urchin with a sling shot about to hit the minister in the back of the head. Another church scene with a mother reaching out to save her baby who was teetering on the edge of the balcony banister.  All his people had a humorous, comic book aspect to them.  They are crowd pleasers. 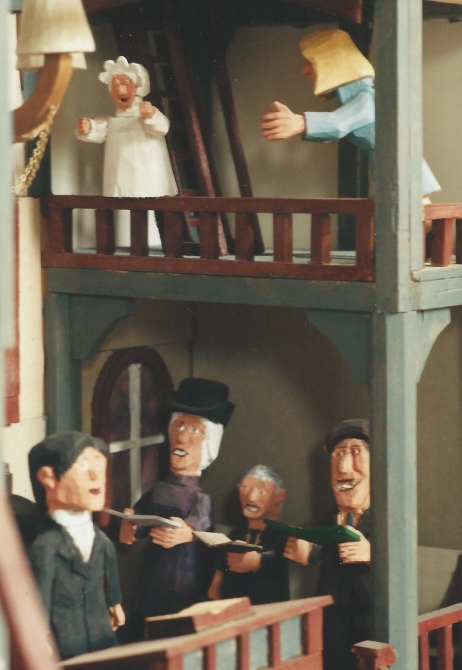 This intensely shy and unassuming man was born in Maitland Bridge, Annapolis County in 1917. He was a woodsman, sawmill worker, and farmer during his working life and only took up carving and model making in his 60’s.  His wife of 39 years died in 1985, and he has no other brothers, sisters, or other children.  He lived with his only son in Wolfville, then Toronto, and then back to Wolfville with his son when the work concluded in Toronto.  He lived there quietly producing his art until he died.  I cannot find the date of his death on-line but I know he was very old.

I like the fun of his dioramas with people, but I admire most the simple architectural elegance of his buildings. You can tell he created these to satisfy his own love and fascination with architecture, and had no commercial intentions. 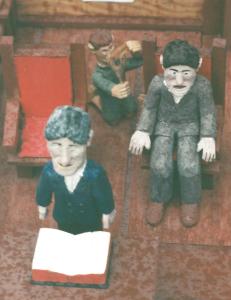 So when Marty arrived at the house, he admired and agreed to purchase many recent works, but before he left he asked once again if he may at least meet the artist who was working away in his back room.  The son agreed to ask, and sure enough a few moments later a small grey man slid into the room.  Came up to Marty and put out his hand.  “how do you do?”.  They shook hands and Marty barely had time to say “what a pleasure it is to meet you” when Mr. Dukeshire spun on his heels and headed back into his room, closing the door behind him.

1 thought on “Looking into the private world of Fenton Dukeshire”