We met Canadian born, Miami based art dealer Joy Moos in 1994 at the one-time Canadian Contemporary Folk Art Festival, where we sold her some pieces, and both discovered and bought for the first time the paintings of Woodstock, Ontario artist Barbara Clark-Fleming.  Joy is a character and we hit it off immediately.   Then in the fall of 1995 Joy came to see us at the Church and picked out several other pieces she was interested in purchasing.  That was when she proposed that if she were to purchase a half dozen or so pieces, would I be willing to bring them to the Outsider Art Fair in New York city the following January.  She asked me to help man her booth, and be her on- site “expert” on Canadian Folk Art.  She offered to cover my costs and would allow me to bring a few pieces to sell at the show of my own.  Hmmm, a chance to go to New York and see the Outsider Art Fair from the inside, and hopefully make a few bucks.  “I’m in”.  So early on January 24th under sunny skies I drove to New York with a van full of Canadian folk art and arrived about 3 in the afternoon at the famous Puck building at the corner of Lafayette and Houston Streets in the Soho District.  She had a couple of assistance come in from Miami and it didn’t take us long to set up the booth.  I then checked in to our favorite downtown hotel, The Leo House, ($75 a night at the time and clean), and then met up for dinner and an evening’s debauchery with an old pal, the Oklahoma born artist Don Bonham who lived and worked at the time in a studio in Brooklyn, situated right under the Brooklyn bridge. 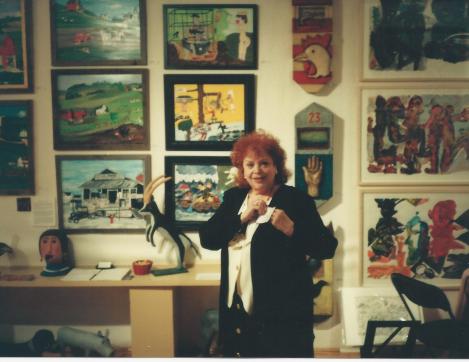 Joy Moos in her booth at the 1996 Outsider Art Fain

In spite of the late night, I arrived early Friday morning, well in advance of the 5:30 preview because I wanted the chance to look at everything before it was time to work.  My show badge allowed me easy entrance, and I was immediately delighted to soak up the excitement of the pre-show set up.   Lots of New York and New jersey accents coming from the workers as they scurried around setting up the lighting, carpets, curtains, etc. and a chance to see all the famous gallery owners that I’d read about for years, never thinking that I would ever have a chance to meet them, let alone participate in a show together.  Three large rooms of side by side exhibits encompassing 35 dealers.  Right across from us Dean Jensen had an expansive display of 1920’s-30’s tattoo flash that both shocked and delighted. Across from them was the wonderful booth of Aarne Anton of the American Primitive Gallery.  A man who was immediately welcoming and friendly, as well as informative. I moved slowly up and down the rows taking in everything.  Each booth was chock a block with fabulous work.  Sometimes inspiring and beautiful beyond belief, at other times dark and disturbing.  It was overwhelming. Then I moved into the next room where I could see Carl Hammer from Chicago installing paintings by the yet relatively unknown recluse Henry Darger, whose work I found both beautiful in the way a fine Japanese watercolour is beautiful, and simultaneously disturbing in that the content is what seems to be children at war, with impaling, and death, and all that war entails.  My emotions were beginning to run high.  I was a couple hours in and already needing a little break. 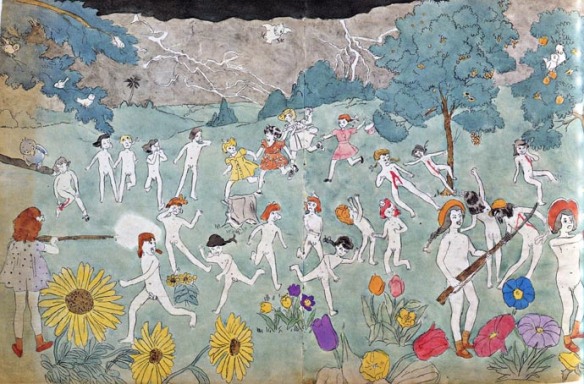 A work by Henry Darger

So after a nice lunch in the on- site canteen, I took a bit of time to look through the expansive book store, and noticed among other things a book about Bill Traylor, who had been born a slave on an Alabama farm in 1856.  He remained on the farm until the 1930’s, when at the age of 80 he settled in Montgomery.  Impoverished and homeless he spent his days sitting on a box on a downtown street drawing scenes of the life which surrounded him, and from his memories.  I was deeply affected by the simplicity and directness of his exquisite drawings.  I put down my $16 and bought the book. 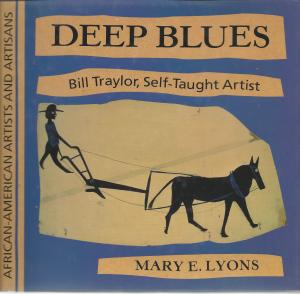 Not ten minutes later I was looking in a small booth, and low and behold there was a little 5” x 7” framed drawing by Traylor of a walking man with a top hat and cane, just being hung and labeled by the dealer.  I noted the price was $750 U.S.  I had brought a thousand Canadian in case I found something I felt would be good to purchase, although my thinking was that there may be some Canadian folk art turn up which may be under priced due to the location. It had never occurred to me that I may want to buy something American.  I was stopped in my tracks.  I had no idea what the value of a small, simple line drawing by the artist may be worth, but I was completely drawn to it, and so asked if the dealer would hold it for me for fifteen minutes while I reflected and called home to discuss it with Jeanine.  The dealer was nice enough about it but refused saying that the preshow was when he did some of his best business and it was a fair price.  “O.K. I understand, but I am serious and I will be right back.”  I went out back of the building to get a cell signal and happily Jeanine answered.  Upon describing the situation, she expressed that she had no idea what the work was like, and yes $750 U.S. seems like a lot for a small line drawing, but if I felt strongly about it that I should go for it.  I ran back into the show to witness Carl Hammer walking away with the drawing, as the dealer counted out the cash.  Damn it.  Another example of “you snooze, you lose”, and learn to trust your damn instincts.  Hammer put it in his booth at $14,000 which I have come to learn is still a good price for a Traylor.  Here is a link to an article in Art News which describes the rise of Traylor’s prices   http://www.artnews.com/2006/01/17/prices-climb-for-the-art-of-bill-traylor/ 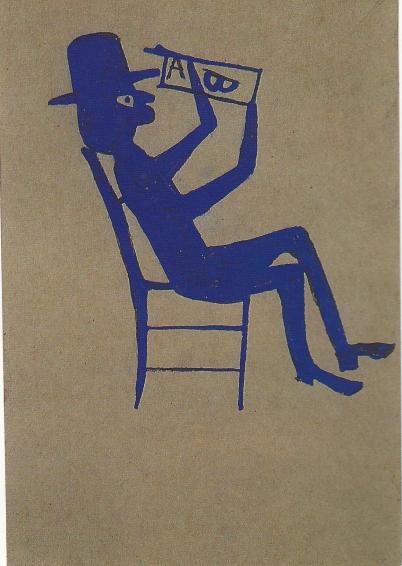 So I only kicked myself for an hour or so before realizing that at least my instincts are good, and it was time to get on with the show.  I found it fascinating to watch the wheeling and dealing going down American style.  These boys and girls meant business and were frankly ruthless in comparison to my much more conservative and polite Canadian compatriots.  Some of them were very open and welcoming to me like top New York dealer Phyllis Kind who closed her shop and retired in 2009 after 40 years of dedication to the cause of Outsider art.  She showed interest in the photographs I brought of Billie Orr’s work and suggested I come by her gallery on Saturday when she would be in attendance.  I enthusiastically complied and spent a wonderful hour talking to her.  Billie, as stated in a previous blog was not interested so nothing came of it, but I cherish the memory of the meeting.  Some dealers were highly competitive and not nice at all.  Ricco, of Ricco/Maresca Gallery was totally dismissive suggesting he didn’t think there was any art in Canada worth bringing to the American market.  All in all, I learned a lot by being the fly on the wall.  Observing the “big guns” getting together and discussing who they “mutually agreed” would be the artists most favored and promoted that year. 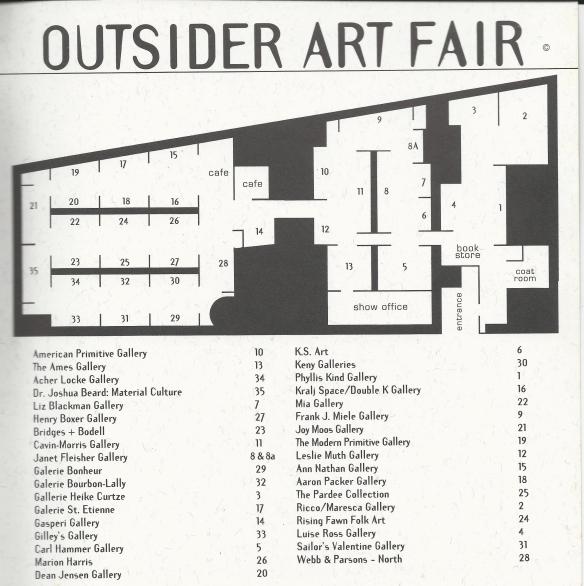 map of booths at the 1996 Outsider Art Fair

The preview was packed right up until 8:30 closing and when not selling, I was conscious of how glamourous a New York art opening really is.  The stars were out.  Oh look, there’s Bette Midler (very nice and much shorter than you would think).  And there’s Marisa Tomei.  And look it’s Mathew Broderick and Sarah Jessica Parker.  Etc.  The number of sales was amazing.  Over the three days, Joy sold out at least half of her booth.  I sold everything I brought.   When I packed up and headed out for the 8 hour drive back home at 6 p.m. on Sunday, I was a happy man.  I had witnessed a great amount of inspiring art, enjoyed experiencing a major American Art Event from the inside, and I had a few bucks in my pocket to take home.  Joy was happy with the amount of art I sold for her, and I decided then and there to take her up on her offer to come back in January of 1997.  Blog to follow.

I’ll close with a quote from Phyllis Kind from the Maine Antique Digest coverage of the show.  I think it sums it up.  “The whole concept of Outsider Art is the notion that it is rare when genius, and total lack of knowing what one is doing marry” 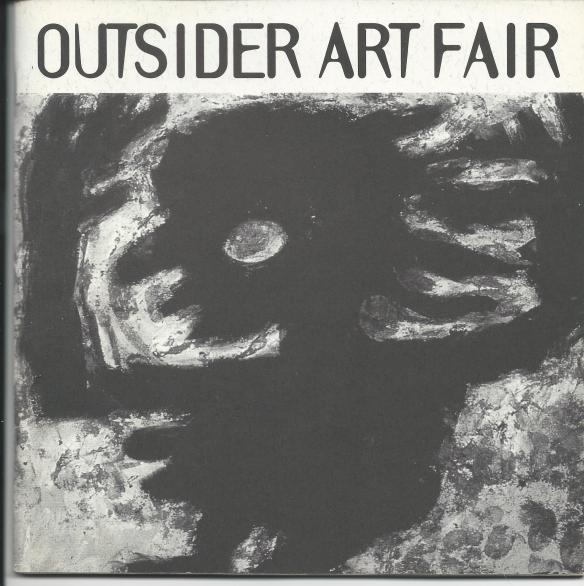