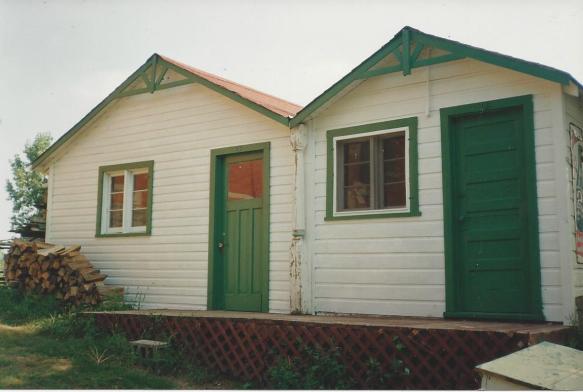 As I sit here with my shoulders aching after just an hour of gardening, it is good to remember that there was a time when we were young, and healthy, and resilient, and happening on all cylinders.  From the mid 80’s to the start of the nineties more or less, we moved enough “product” that we employed from one to three people daily to keep up with the demand.  Both from sales at the Harbourfront Antique market in Toronto, and through our folk art mail order business. 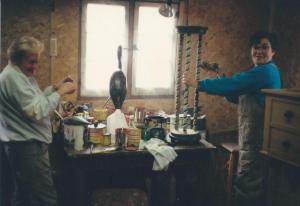 Edith and Jeanine at work

Antiques brought back from Quebec needed to be cleaned, and/or stripped and refinished.  Now don’t get excited, we never stripped good paint, but the reality was that there was a lot more people looking for a nicely refinished pine piece than there was looking for good paint, and good paint was hard to find so we played to our market.  The kids understandingly wanted to eat, and for quite a while there you could count on selling any refinished pine, or butternut bonnet chest you would bring to the market.  The good thing in this was that the Americans didn’t like bonnet chests so they were always cheap and available in Quebec.  But I digress.  Besides the antiques, we discovered that there was a good market for a reproduction pine armoire we found in Quebec that was deep enough to house those giant honking t.v.’s that everybody had back then, and still look reasonably good among your other antiques. Of course very few old cupboards were of the proportion to do this, and there was a demand so it filled a niche. 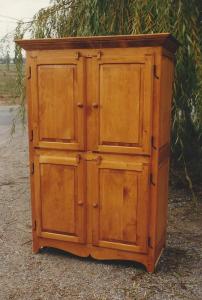 At the peak we could expect up to a half dozen orders per week.  We bought them in the rough from Pierre and Claire Trudel, who had a small factory near the pickers barns in the Victoriaville area (future blog).  They also made the carved wooden ducks, birds, and animals that we sold at the market and on mail order.  So after picking the antiques from the region I would swing by Pierre and Claire, and fill the truck with our order of new cupboards and animals.

Once home, besides the work on the antiques we had to refinish or paint the repro cupboards as ordered, and similarly paint or varnish the wooden animals, so it very quickly became more than Jeanine and I could handle on our own.  Albert who I have mentioned before and will undoubtedly mention again came first, and then a neighbor lady named Edith joined us who felt lonely at home while her husband delivered the mail and who enjoyed the work and the extra income.  Then as was necessitated by increasing sales we would hire a local high school student or two to keep up.  The place was hoping from 8:30 until about 5:30 every weekday, and I would quite often go back in the evenings and work until late, especially if it was getting close to Sunday, and the Toronto market, or we had a large order to fill. 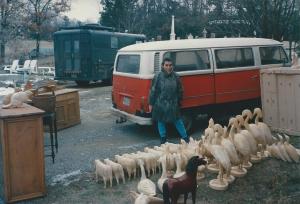 A load of Trudel animals

I know there are a lot of collectors who look down on selling reproductions along side antiques, but at Harbourfront in those days it was perfectly acceptable as long as they were sold as what they are, which is a reproduction.   There was a lot of people looking for entertainment units, and I’d much rather provide a new one that did the job and was well made, than cutting the middle post out of an actual antique cupboard or some other such none sense. It also really helped with the bottom line. 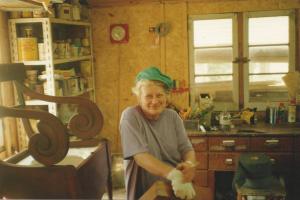 Similarly, the carved animals, were attractive to heaps of folks who didn’t necessarily want to spend much, or deal with a challenging piece of original folk art.  These folks were looking for a nicely carved and finished pine goose to go along with the rest of their “country pine” décor. I think back on this period as our “manufacturing” phase, and it was a lot of work,  but it was lucrative at the time, and it gave us and a few other people some relatively interesting and rewarding work. We played it until the demand died out, and when the “craze” subsided we quit reproductions, and focused entirely on original finish antiques and “real” folk art.  To everything there is a season. 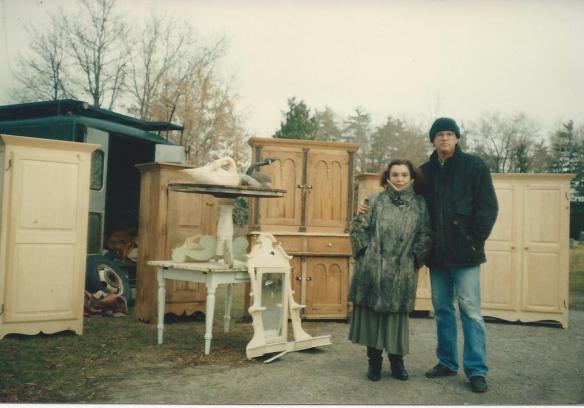 Jeanine and I with ordered cupboards