I was going to write on another subject, but here it is 3 p.m. in Port Dover, Ontario on a sometimes sunny, sometimes raining Friday the 13th of May, 2016, and there are over 100,000 bikers in town.  The air is a rich mixture of gasoline fumes, rock and roll, and Harley grunts, and well, it’s damn near impossible to think about anything else.

I don’t own a motorcycle.  Have never had any inclination even to ride one, other than dirt bike fun as a kid, but I can see that it is a great pleasure for those who are so inclined.  After living here for 13 years we have experienced a half dozen or so of these events.  The other times we would just get out of Dodge, but occasionally we have friends who want to experience it, or we just don’t feel like clearing out, so we stay put.  The experience is always much the same.  The crowd has gotten bigger each year and the management of said crowd has gotten smoother, but basically it’s the same routine.  A few hundred come in on Thursday and keep the Norfolk Hotel (our neighbor) hoppin’ until about 2 a.m.  It was a little earlier last night because a thunderstorm arrived about 1 am and drove everyone to their tents or hotel rooms.  This morning starting about 8:30 am the police direct the throngs that arrive, up St Andrew Street past our house, through town until they hit Chapman Street where they go left past the Main Street which is reserved for walking traffic, to St. George Street, where they descend back down to Harbor St.  Here, they hang a left and head out the way they came in.  During this procedure most stop and park somewhere along the way, buy a coffee and doughnut, or later a beer and pulled pork sandwich, buy the t-shirt and perhaps some dope paraphernalia or leather goods.  They walk around checking out each others bikes and outfits, and then about now 80% of them  get back on their bikes and go home.  Some will stay over and rock the night away, but by noon tomorrow there will just be a handful of bikes, things will be cleaned up, and you will have trouble finding evidence that anything out of the ordinary has occurred. 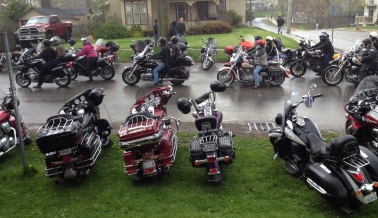 Other than a chance to see bikes and chat with those with similar interests Friday the 13th is fundamentally a fashion parade.  It strikes me that in spite of the bad ass, counterculture persona of the bike culture, the end result is that everyone dresses in some version of the same components; black t-shirts and jeans, black leather everything, spooky jewelry that would not be out of place at a Mexican day of the dead celebration, and other death and rock imagery which when put together has the effect of making everyone look like they are members of the same tribe.  What’s with that?  I suppose there is comfort in those numbers.

And I would like to state that although I don’t “get it”, I ’m not judging or putting anyone down.  It’s good for the economy of our little town and I have no problem with people having fun. Enjoy yourselves and live the dream.  I recognize it’s the restrictions of my perspective that excludes this as really good fun. In spite of trying, I just can’t find anything to be interested in.  Admittedly some of the bikes are interesting as sculptural form, and some of the people very photogenic, but it only goes so far when balanced against the discomfort of being in a dense crowd, listening to bad cover versions of songs you were quite happy to leave in the 70’s, and waiting forever in line to overpay for a greasy pulled pork sandwich. 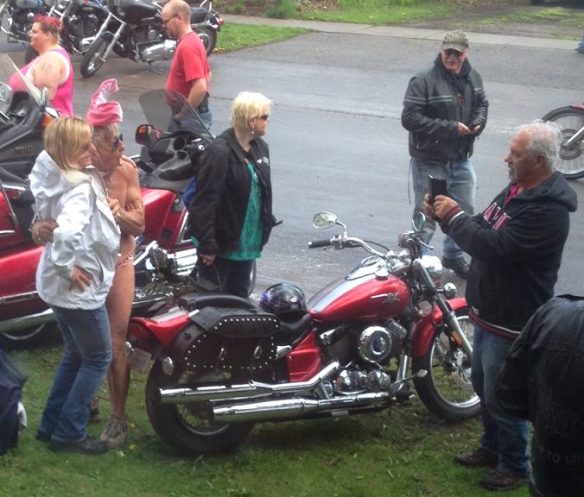 There’s a guy who has become a genuine Friday 13th celebrity which best illustrates the cultural depth of the pond in which we are swimming.  He comes to every one of these and for some reason has chosen the boulevard beside our house in which to change wardrobe three or four times over the day.  Meet “thong man”. Pleasant enough fellow who seems delighted to show us his aged bum in a variety of thong based costumes. Today he had a Police officer based costume with police badge patch covering his genitals, and fuzzy pink handcuffs.  Then he changed into a pink bunny outfit with white pompom tail; then it was a fluorescent green number which may have had something to do with leprechauns.    As you watch, older and younger women approach to have their picture taken with this star.  Quite often, with their full acceptance and encouragement he is photographed grabbing the subjects breast and looking lecherous.   Boyfriend or husband nearby, grinning behind their cell phone as they click for posterity.  Thong man’s wife looking bored and disinterested, wondering when he will have had enough and they can just go home.  And so it goes.

Ahh, I hear that the rock and roll has started again.  Time to go and get myself a greasy pulled pork sandwich.  Happy Friday the 13th from Port Dover.