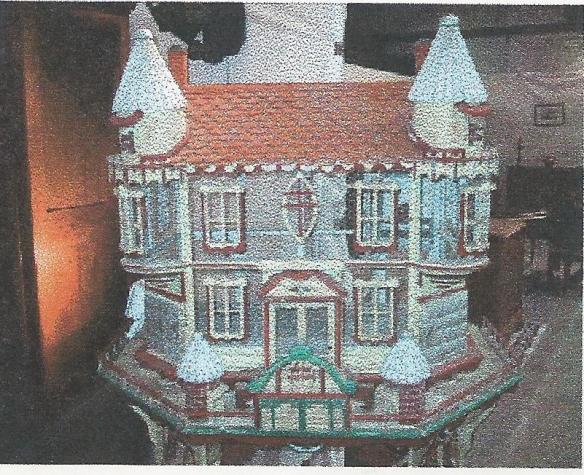 Right up front, I must apologize for the quality of the photos.  I loaded these from scans back at home and did not realize until now that there was a problem.  I am here in France for a month without access to my original photos.  I will correct this when I get home.  For now, this will have to do.

Even from this lousy photo, I hope that you can see that this is a substantial birdcage. It stands about five feet tall, and is about three feet wide.  It is in two pieces.  It has carved hearts and diamonds, roof tiles and decorative trim.  All precisely made by someone who really knew what they were doing, and really loved birds.  There is even a little platform on the bottom which you assume was a place for the cat to sit to watch the birds.  It is magnificent in it’s design and construction. Built in the 1940’s.  A killer bird cage if ever there was one.  Something I couldn’t imagine even existed until I saw it.  So here’s the story.

My wife Jeanine is from the south west of France, and for years we would supplement our trips back and forth to visit her family by bringing over two very large suitcases full of fine linens which were easy to find in the Delhi area where we lived.  This because the area was settled largely by Belgians, Germans, and Hungarians coming to grow tobacco.  They brought a lot of beautiful stuff with them.  You could pick it up at yard sales and auctions for next to nothing.  Upon arrival in France we would go to a shop called “Au Bain Marie” near the stock market in Paris, and sell everything to them.  They always gave us good money because they would get top dollar.  It kind of blew our minds when we saw a very fine hand embroidered bed set of sheets and pillow cases for upwards of $1,000.  We would then take the money from the sale, and buy items we knew would be popular at home.  Mostly pottery, art, and forged iron items.   This was before all the repros hit the market and ruined everything.  Our two large suitcases would always pay for the trip and more.  It was a good system.

We saw lots of larger items that we knew would be popular back home but refrained from buying them, due to the hassle of arranging transport.  We would occasionally mail back a big box, but in general we stuck to things we could handle ourselves.

And so it came to pass that on one fateful trip we decided to take in one last antique show in the city of Bayonne the day before heading home.  We had a little space left in a suitcase and thought that perhaps we would find a couple more smalls.

Upon entering the hall, my jaw dropped as I saw this thing at the end of an row.  I couldn’t quite believe it was real.  At least I was hoping it wasn’t because I knew that if it was, I was in trouble.  My heart was already beating fast.  Damn if it didn’t just keep looking better the closer we came. In spite of myself, it quickly became one of those, “I must buy it no matter what” moments. Jeanine loved it too but was quick to point out that as it was so fine, it would be almost impossible to get home without damage.  I couldn’t accept this.  After a lot of pleading and persuading I was able to convince her that it would be worth any trouble we would have to go through.  The clincher was that we knew the dealer, and she said her husband would be able to make a box and arrange the transport.  We laid down the money which was substantial, and left feeling both elated and terrified.

A couple of days later, after getting home we got the call that we feared, that they were “terribly sorry but she had spoken out of hand, and there was no way they would be responsible for shipping.”  She offered to return our money, but we said no, keep it for us , and we will pack it and ship it ourselves on the next trip. 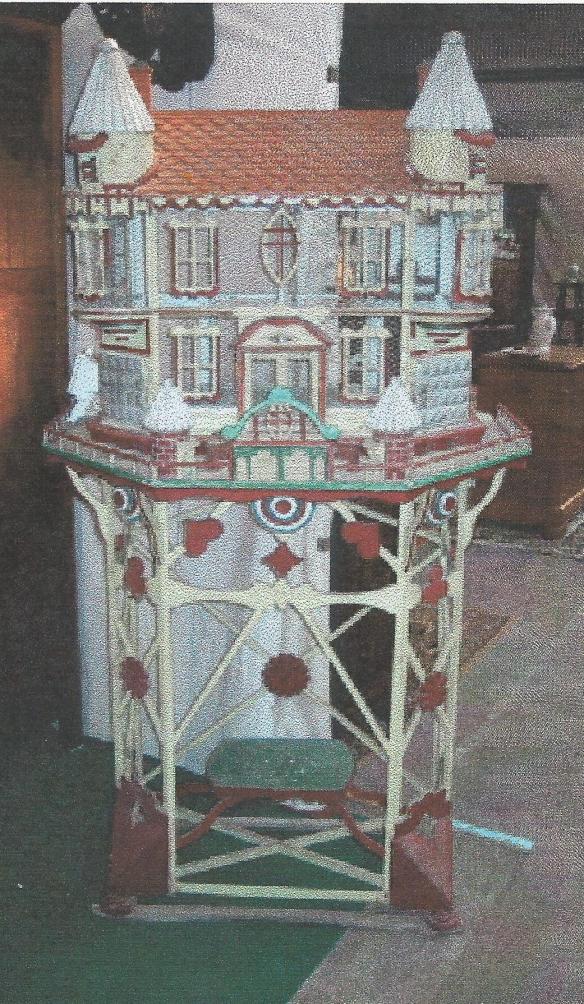 So it was six months later that I borrowed Jeanine’s cousin’s pick up and brought it to the house.  My future son in law Anson was there with our daughter Cassandra and his engineering skills came in handy as we constructed the box that we hoped would bring it back in one piece.  Surprisingly, because it was light, it didn’t cost all that much to have it flown over.  We were full of apprehension as we arrived at the Toronto airport shipping warehouse, but there it was, looking just the same as when we had left it at the Biarritz airport in France. O.K. so we got it home.  Now the question was is anybody going to pay the hefty price tag which we would have to put on it.

The Port Carling show was the next week so rather than wait months for Bowmanville we thought we would give it a try.  Sure enough, on opening night some wealthy South Africans who had just bought a local cottage walked in, took one look, and said we’ll take it. No negotiation. They even bought a half dozen Wilfred Richard birds we had displayed in it in spite of the fact that they were about $600 each. Big sigh of relief.  Sometimes when you stick your neck out things work out.  Gratefully this was one of those times.