part of Leveque’s yard showing his workshop at right.

In the early nineties as a result of doing many shows in Quebec, we got chummy with Riviere de Loup dealers Bertrand and Joanne Gaudreau.  Bertrand worked cutting wood all winter, and in the summer they ran a wonderful shop in a big red barn situated next to the La Malbaie/ Riviere de Loup ferry terminal on the St. Lawrence river.  Perhaps it’s still there. It’s been years since we were up that way. They always had interesting things and good prices so one summer trip, (I think it was 1993) we took them up on their offer to come visit them when we were out their way.

They knew of our passion for folk art , and were generous enough people to tell us where several of our favorite artists around that area lived.  This is rare among dealers as most are determined to guard their sources, but  the Gaudreaus realized we were a long way from home and would not be passing by very often, and they were all too happy to help us.  After going through their barn and buying a dozen or so great things we went off not far down the highway to where Felicien Levesque lived. He had always been one of our favorites for his whimsical, “outsider” style and we were delighted at the prospect of meeting him.  When we pulled in to the yard covered with folk art we knew we had found the place.  It was a classic old wooden Quebec house with a big porch and there was an impressively large  workshop in the back.   We pulled in and after taking the above shot we marched up to the back door and knocked.  After several moments, a middle aged woman opened the door  a crack, and directly asked us what our business was there.  We replied in French that we understood that this was the home of Felicien Levesque, and that we were folk art collector/dealers from Ontario who wished to make Mr. Levesque’s acquaintance, and possibly buy some folk art.  ” Oh no, I’m sorry, Mr Levesque sees no one and none of the folk art is for sale.  Thank you.  Goodbye”.  Slam.  We looked at the closed door for a moment considering if there was any point in knocking again and trying to persuade her, but it was pretty obvious we were not going to be received so we left and went to have lunch with Bertrand and Joanne in their beautiful home down the road. 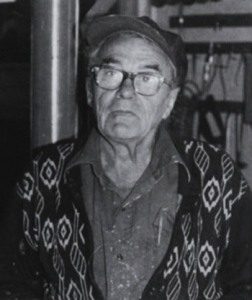 Over lunch we relayed our sad tale and Bertrand laughed and said ” Oh that’s Felicien’s daughter and they are all a little freaked out right now, because the Quebec museum was by last week, and bought all the folk art on his yard (about twice what is pictured above) for $20,000.  When she heard your English accent she probably thought you were from the tax department or something.  I’ll go with you after lunch.”

When we arrived with Bertrand, and after a short explanation, he left and we were immediately invited in and brought into a classic old Quebec kitchen.  Walls and ceiling completely paneled  in white tongue and groove pine, chairs and buffets along the walls, big harvest table in the middle of the room, and a single bare bulb hanging down over the table.  Around the edge of the room sat Madame Levesque, their daughter, her husband, and their two kids.  They all sat  quietly at first  and looked on as we answered numerous questions from Mr. Levesque’s daughter about where we lived, what it was like there,  what type of house we had, what is Toronto like, etc.  It felt like we were on display as exotic curiosities, and soon everyone joined in asking us everything about our life in far off Ontario.  We were told that Felicien always took a nap after lunch and would join us shortly.  Sure enough after about twenty minutes he appeared rubbing his eyes and looking curiously at the new arrivals. It didn’t take him long to get up to speed and he proved to be very friendly and outspoken,  telling us a quick version of the story of his life, how he had one of the finest workshops in the region, and how he had just recently sold his work to the Quebec Museum and that they were mounting a show of his work.  He was very proud of the recognition and we could see it meant a lot to him.  So over a cup of coffee the time passed pleasantly and we eventually explained that being big fans of his work, we would love to see his workshop and any work that he could show us; and that if it were possible we would love to be able to purchase something from him.

Hi daughter jumped in “Oh nothing is for sale, as I told you”.  Followed immediately by Felicien saying “Don’t listen to her  It’s my work and I am the one who decides”.  A cold stare, an awkward moment, and we were off to the workshop.

For someone who made such crazy things, he had an amazingly organized and well equipped workshop. We noticed several pieces about in various stages of completion, and after more talk about his technique and approach, he lead us off to his storage room. 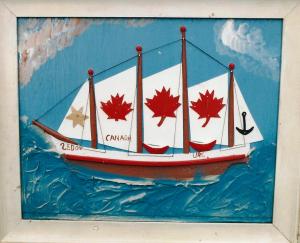 Wow.  It felt like we were entering King Tut’s tomb. The whole room was floor to ceiling shelves covered in every type of folk art imaginable. Hundreds of small bird’s, people and animals, dozens of  paintings and mid size constructions, and a few large pieces like the “sinking of the Titanic” pictured below.  We stood amazed and dumbstruck for a moment, and then I sheepishly asked ” so would we be able to by a couple of pieces?  Is anything for sale?.  He promptly answered “It’s all for sale”.  Visible flinch from the daughter.  “Oh, o.k. that’s great, so for instance how much do you want for this boat painting”  Leveque says “$50, while simultaneously  his daughter says $125. Oh, rats. What to do now?  I look back and forth at them.  He flashes a grimaced smile at his daughter and tells her to go in the house.  She looks annoyed but says nothing and leaves. We felt a combination of regret for the hurt feelings of the daughter but a  greater relief that Felicien was now completely in charge of the situation.  We put together a big pile of folk art, 50 or so pieces, which Felicien recorded in crayon on the back of an old cereal box.  We counted out the cash and started packing our purchases and putting them in the truck.  Not wanting to be a part of any further negotiations between himself and his daughter we left shortly thereafter, waving good-bye to Felicien who stood smiling in the middle of his recently sold yard  We were feeling lucky that we had met him at the peak of his game,  and before he relinquished control of his work to his family.  He died a couple of years later and we never did make it back that way.  Here is a link to his biography  .http://www.folkartcanada.ca/Que_FL.html 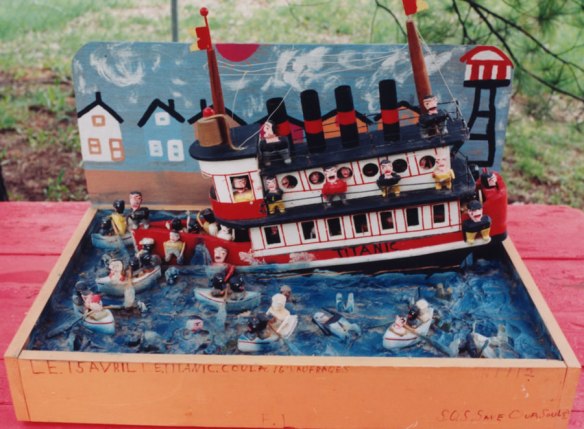