By the mid 1980’s along with our antique business, we supplemented our income by  setting up a mail order business selling the carvings of Pierre and Claire Trudel, who we discovered had a workshop of about a dozen talented woodworkers making several lines of reproduction antique furniture, as well as copies of various decoys, and other Quebec folk art.  An average duck decoy would sell unfinished for about $15, and we would sell them finished for about $45. This commercial operation also carried a cigar store Indian which I knew was carved by a nearby artist.  I would come by every other week and buy about 50 or so carvings, including 4 or 5 Indians.

One day when I arrived Pierre said, “well I’m just going now to pick up the Indians, would you like to come along.”  “Well, of course I would”, and so off we went a few kilometers away to a town called St Eulalie (you gotta love those Quebec saints). We pulled in to a modest house and workshop along the river at the edge of town.  I could tell by the many totems, and stacks of wood that this was the place.

Roger was a jolly fellow who immediately launched into a funny story in a thick Patois.  I couldn’t understand a word, but I could tell it was funny because both he and Pierre were laughing so hard.  I joined in.  We had a great time.  I couldn’t help but notice that Roger was standing ankle deep in wood chips, and lighting a hand rolled cigarette with one hand, hot ashes falling to the ground.  I also noted that Roger carved a lot more than cigar store Indians. Cows, pigs, bears,fish, beavers, frogs, etc. They all had humor and a wonderful original style. I was buying enough from Pierre that he didn’t mind me buying some of Roger’s carvings, which I did happily that day, and every trip I made thereafter. 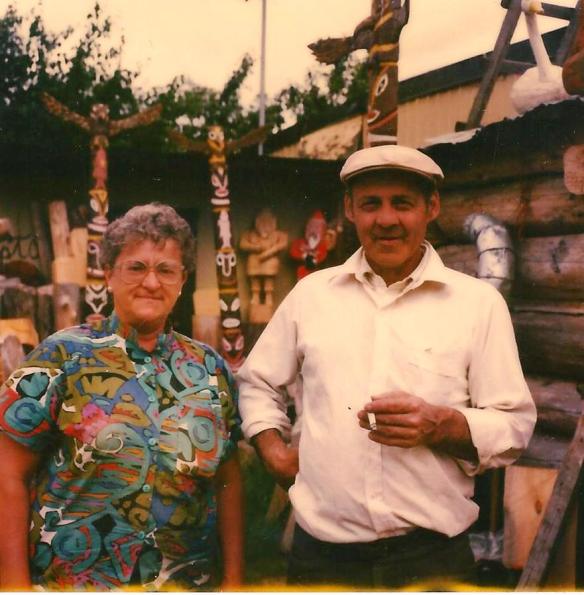 One day I arrived to find the entire yard covered with dinosaurs.  Apparently Roger had watched Jurassic Park with his grandchildren and was inspired.  Another time I was greeted by a giant mother giraffe, with a feeding baby underneath. The mother was too big for my truck but the baby came home with me.  Roger and his wife were always extremely welcoming and quick with the funny story,  and I always enjoyed the exchange, although I have to admit that in spite of my reasonable abilities in French,  I never got more than about 20% of what he was telling me. It didn’t matter.  We always had a wonderful time.

I did come to find out that he is of Mi’kmaq heritage, and that he loves to fish and hunt with bow and arrow, and that he is a warm and loving husband, father and grandfather, who has a God given talent for making his own unique version of Quebec carving.  He told me that when he was young he was taken on as an apprentice by a cigar store Indian maker, and that he had made hundreds, perhaps thousands over the fifty years or so that he was active  By the late 1990’s he was doing less and less carving, and more and more fishing and hunting, and I had also quit making the trip so often. In 2005 I dropped in on the Raymond’s for old time’s sake and Madam Raymond said that Roger was down at the river fishing.  As I drove away from the house I saw Roger standing in the middle of the stream casting, and he turned and saw me, but as we were too far apart to have conversation over the babble of the water, we just waved at each other, and he gave me his winning smile, and that is how I remember him.  As far as I know he’s still kicking. 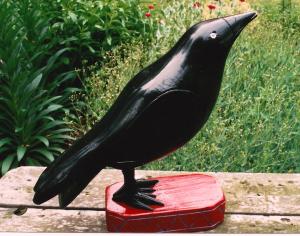