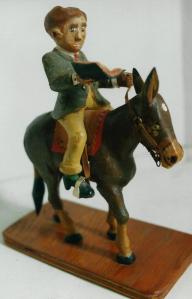 In reading the excellent report by Larry Thompson in the latest Canadian Antique and Vintage Magazine  of Tim Potter’s auction of the collection of the late Ken Murphy, I was happy to see that several of the pieces by Wallace Murdoch which I had sold to Ken drew strong prices.  This in spite of the fact that nobody seemed to know much about him.  It occurred to me therefore that it may be of interest to those who bought the works and more generally to those of us interested in Canadian folk art for me to tell the story of buying the collection and what I came to find out about Mr.  Murdoch.

It was May of 2000 when dealer and show promoter John Forbes called me and told me that I should get on up to his Guelph home to see a collection of folk art he had just acquired.  “Yup, I’ll be right over”‘.  Jeanine and I went the next afternoon to see him and there on the harvest table was about 30 pieces of excellent carving, mostly centered around horses. We were duly impressed and quickly came up with a figure we could both live with.  John didn’t have or at least wasn’t sharing much information about the artist. Only that he had carved in the sixties, had lived in Shanty Bay, had died recently, and that a picker had bought all the works available from the family. No matter.  The work was strong and beautifully rendered and we were happy to have it all.

Then I did some nosing around and found out that the picker in question was Bob Creighton whom I knew, but when asked Bob was holding his cards close to his chest and added nothing, presumably so he could go back to see if he could find others.  So I decided to take a trip up to Shanty Bay which is near Orillia, Ontario to see what I could find out.  I went into an antique store there and the woman informed me that Wallace’s sister was still the post master in nearby Guthrie, so I went there, and sure enough found her working.  She was pleased to provide me with the details of Wallace Murdoch’s life and the copy of a 1966 Toronto Star article..

Wallace Manson Murdoch was born April 24, 1893 in Bobcaygeon, Ontario. Before he was a year old his family moved to South River.  In March 1917 he married Myrtle Boyd.  They moved to the Barrie area in 1927, and then to Shanty Bay in 1930.  Here he stayed for the rest of his life.

He had a service station and auto repair shop.  Then he had the idea to start a school bus service which he did initially with horse and wagon, and then continued to operate this business for another 27 years.  Wallace and Myrtle had two son’s and five daughters.  In 1959 Wallace had a severe heart attack and was forced to retire and was forbidden to do any heavy work.  He found it difficult to just sit around so he started carving.  At first he just drew horses on plywood and cut them out.  Then he advanced to carving the complete forms out of blocks of white pine. Then he moved on to adding harness and sleighs, wagons, carts, and stage coaches.  He often fashioned his own knives to fit his needs.

In the Oct 1, 1966 article, Dean Hughes points out that Wallace, although surrounded by hundreds of carvings, mostly horses that he had accomplished over the last six years, was reluctant to sell his work.  And since Murdoch obviously didn’t do it for money, what did he get out of it?

“I seem to leave a little of myself in everything I carve.  The time just seems to fly by.  It takes me about fourteen hours to carve a horse and I love every minute of it – from the minute I get up in the morning until I go to bed. And I get to love these horses I carve so much that I don’t like to part with them. Wallace Murdoch died November 3rd, 1966